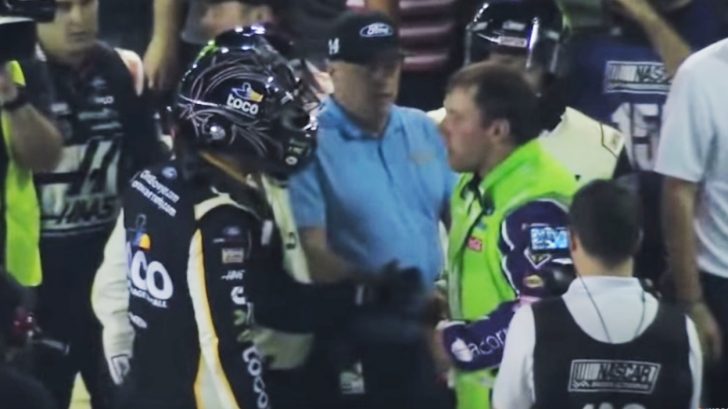 An incident occurred after NASCAR’s All-Star Race at Charlotte Motor Speedway in Concord, North Carolina on Saturday (May 18).

After #42 driver Kyle Larson won the race, followed by Kevin Harvick and Kyle Busch, the 16 drivers who crossed the finish line took a cool down lap.

After the lap, Clint Bowyer, who finished 12th, ran up to Ryan Newman’s green #6 car and began punching him before he even had a chance to exit his vehicle. Newman, who placed 14th, knocked Bowyer’s car into the wall during the cool down lap after clashing more than once.

“Unlike other All-Star games, these fellas have to race each other every week of the season,” the announcer noted. The announcer also alluded to something going down during the actual race that would warrant a fist fight, so they caught up with both drivers after the incident, which included Newman confronting the #14 driver once he finally got out of his race car.

Things got a little heated post-race at @CLTMotorSpdwy. ?

According to Newman, Bowyer “shot [him] on the front straight away” during the beginning of the race, so he gave #14 a bump to tell him he didn’t appreciate the way he raced. This went back and forth the whole race, and ended with Bowyer punching Newman several times.

Bowyer told Fox, “Where I come from, you get punched in the nose for that. It’s what he got.”

The fight had to be broken up by crew on the track. Both drivers were called in to speak with race officials, although NASCAR is not penalizing either of them.

Watch what each of them had to say in the video below.

Here's what Ryan Newman and Clint Bowyer each had to say. pic.twitter.com/4fBuwEZ7zE