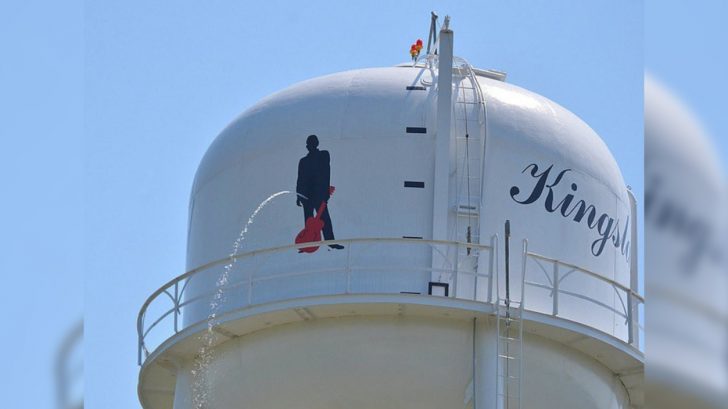 Police have caught the mystery man who shot a hole in the Johnny Cash water tower in the little town of Kingsland, Arkansas, finally bringing the investigation to an end.

Last week, residents in Kingsland, the hometown of Johnny Cash, said they woke up to the silhouette on the water tower of Cash holding a guitar “peeing” on the town below.

Apparently, a sharpshooter with a gun, shot the silhouette directly in the crotch causing it to leak 30,000 gallons of water a day until it was fixed. Photos and videos of the silhouette went viral as soon as they hit the news and social media and it became the big laugh of the week.

The mayor said that it has attracted many visitors to the small town who drive from all over the nation to come see it in person, take photos and laugh with the locals.

Whoever shot the Kingsland, AR water tower is a good shot.

Looks like the silhouette of Johnny Cash has got to go! pic.twitter.com/suGV4v7vti

While most residents thought it was very comical, the act of shooting the tower was very illegal, and after one week of investigation, local law enforcement finally found the mystery vandal.

This guy shot a hole in the water tower causing the Johnny Cash silhouette to “pee”…. Timmy, a dumbass with a great scope, just trying to put out the ring of fire. pic.twitter.com/dFEvsZvUlB

38-year-old Timothy Sled was arrested on Monday and charged with a felony for criminal mischief and another felony for impairing the operation of a vital public utility.

While Timothy is technically facing two felony charges, the mayor seems to think the whole ordeal is very funny.

“Really, this has all just been laughs here in the town,” KARK reported the mayor saying.

Watch Video Covering The Story Below