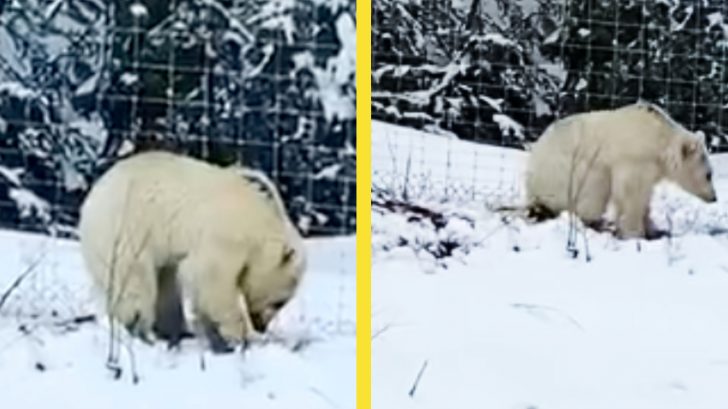 A rare and beautiful sight, this white-fur grizzly bear gave folks at The Rimrock Resort and Hotel the view of a lifetime when they saw him and his brown-furred friend rooting around in the snow near the fencing at the property’s edge.

According to Mike Gibeau, an expert in North America’s grizzly bears who spoke with RMOToday.com, these white-colored grizzly bears are an extremely rare sight to see even though grizzlies come in several different colors.

“It’s not an albino because an albino is something different again,” he said.

Gibeau said the rare color in bears is caused by a recessive gene that makes fur white.

“Black bears can be everything from black to white and in between, and in grizzly bears, it doesn’t happen as often,” Gibeau said, explaining that it’s a recessive gene rather than an absence of pigment.“You do get black grizzly bears, like coal-black, and I’ve seen a number of those, but to have the opposite, very, very light, is uncommon, and to have one that is absolutely white is just unheard of.”

This pair of a standard dark-brown colored grizzly bear and white bear has apparently been seen before in the same area. Just over 50 miles away in the neighboring Yolo National Park, one commenter says that she had spotted these bears in summer 2019 along with a gentleman who had been staying at a lodge. 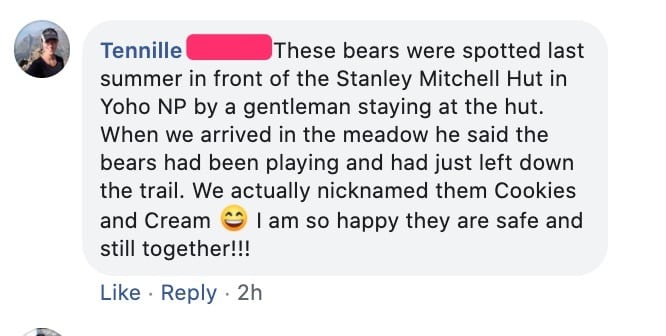 According to Gibeau, this white coloring appears more commonly in the North American black bear and they come in all sorts of shades and colors, but this white grizzly was really something else.

“You do get black grizzly bears, like coal black, and I’ve seen a number of those, but to have the opposite, very, very light, is uncommon, and to have one that is absolutely white is just unheard of.”

“I have never in all my time working with grizzly bears – since the early 1980s – seen a white grizzly bear. I’ve seen a really, really blond grizzly, but never a white one.”

According to a video posted by the University of Alaska Fairbanks Film Archives, there was a white-colored grizzly bear spotted in 1970 and filmed by a man named Waymon Vest.

See the video from UAF Alaska Film Archives below along with the recent spotting in Banff National Park in Canada.

I guess it’s safe to say, the bears are BACK! ?

Posted by The Rimrock Resort Hotel on Wednesday, April 29, 2020