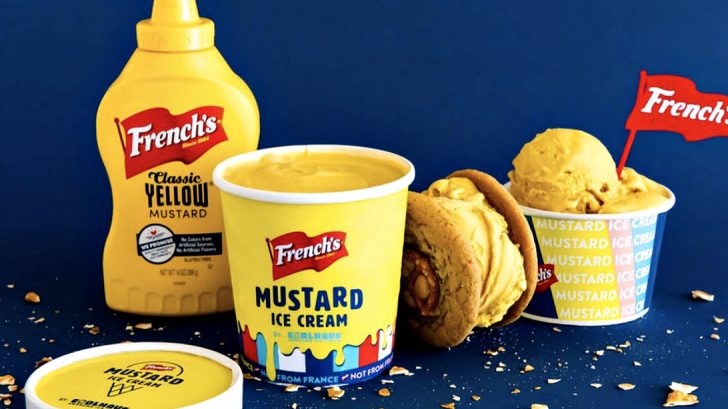 Just when we thought nothing could get be more weird than mayonnaise ice cream, mustard ice cream comes on the scene and steals the spotlight. Not only did French’s introduce the new flavor with the help of Los Angeles cult favorite ice cream creators Coolhaus, but people are loving it!

The limited edition flavor made it’s debut just in time for National Mustard Day (August 3), and was only available in California for a few select dates in August, and in New York City via a groovy French’s Ice Cream truck.

While the treat sounds and looks less than appetizing, those who have had the chance to taste it have been surprisingly impressed.

“When it first touched my tongue, the taste was a little sweet and fruity, almost reminiscent of Starbursts. However, that profile was quickly replaced by a punch of mustard. It’s sweeter and less acidic than the mustard flavor we’re used to, with savory notes,” one taste-tester wrote.

The @Frenchs mustard ice cream shop is right down the street from @BroBible LA HQ, so swung by to check it out. It’s delicious and tastes way more like ice cream than mustard!!! Especially with the cookie and pretzel! pic.twitter.com/e9zkLosJa1

I tried French’s mustard ice cream, and it’s not as disgusting as it sounds ? https://t.co/duIva9zWAZ pic.twitter.com/1fmvreS1QV

Popular hot dog brand Oscar Mayer responded to mustard ice cream with a frozen treat of their own (all in jest, of course). Introducing the Ice Dog Sandwich. Featuring Spicy Dijon Gelato and Hot Dog Sweet Cream sandwiched between a “cookie bun,” the Ice Dog is every hot dog lovers dream come true.