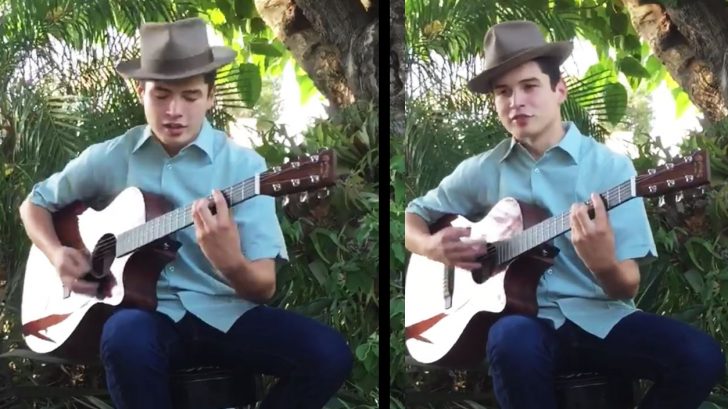 Johnny Cash‘s 1957 single “Big River” had men all across the world resenting the first woman who broke their hearts. Telling the story of a painful breakup, Cash remembers the woman who turned his world upside down.

“Tears I cried for that woman are gonna flood you big river, and I’m a gonna sit right here until I die.”

One cover of this famous tune will take you back. Young musician, Sean Oliu did a shockingly-similar rendition of Cash’s “Big River.” Oliu dressed in Cash fashion from the fedora to the rolled up jeans, grabbed his guitar and stunned the internet. From the first verse, Oliu impersonates Cash’s low-baritone vocals. His playful confidence makes the video even more entertaining!

This isn’t the first time Oliu has covered a classic country artist either! In 2017, he did a Hank Williams rendition of “Your Cheatin’ Heart” that will melt your heart. The now 16-year-old talent has shown to have performed at various concerts since his start in 2013.

Since then, Oliu competed on La Voz Kids which is the Spanish language version of The Voice. Following, he joined the cast of Club Mickey Mouse where his career took a turn. The young singer sure found a way to make a name for himself in the music world! Aside from being verified as an artist on social media. Oliu’s jazzy voice will take you back to the old Cash days!

That cover was in 2017…and he recently released another version in June 2021. Watch that performance below.