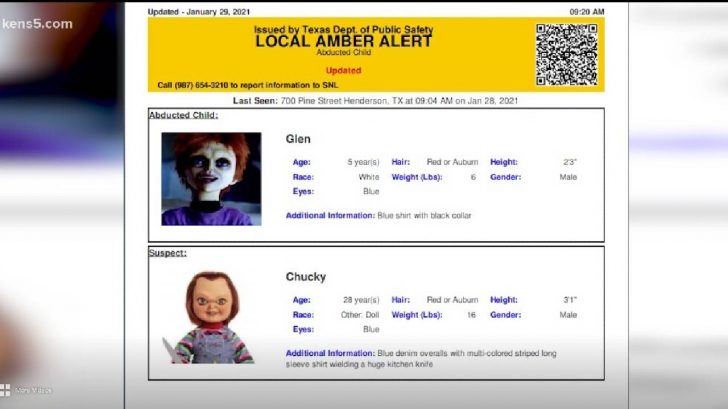 Even if you’ve never seen the 1988 horror movie Child’s Play or its sequels, chances are you still know who Chucky is. He’s a red-headed doll who is one of the most recognized horror characters, having appeared in a total of eight films over the years.

In the film Bride of Chucky, the doll and his new wife, Tiffany, have a child named Glen. Now that you have the backstory, let’s get into the weird events that occurred in Texas this week involving Chucky and Glen.

Apparently, the Texas Department of Public Safety sent out multiple Amber Alert emails stating that Glen was missing and the suspect was Chucky. The email stated that Chucky was 26 years old, weighed 6 pounds, stood 3-foot-1 inches tall, had red or auburn hair, and blue eyes. The alert also stated that he was wearing blue denim overalls with a multi-colored striped long sleeve shirt. His race was listed as, “Doll.”

The Department of Public Safety has since apologized since the Amber Alert went out a total of three times last Friday (Jan. 29), telling KENS5, “This alert is a result of a test malfunction. We apologize for the confusion this may have caused and are diligently working to ensure this does not happen again.”

Don Mancini, the creator of the Child’s Play movie franchise, tweeted that he and Tiffany were “frantic” over Glen’s kidnapping. He also corrected the Amber Alert, stating Glen is “non-binary.”

Check out a news report on the incident below.