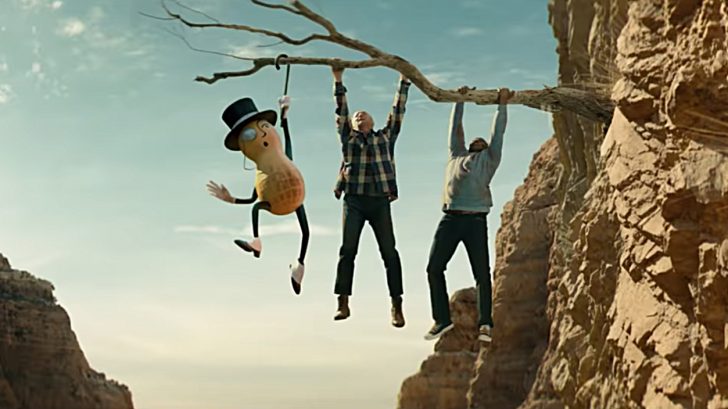 A teaser commercial video for the 2020 Super Bowl was released by Planters on January 22nd showing Mr. Peanut making the ultimate sacrifice to save his friends.

It is with heavy hearts that we confirm that Mr. Peanut has died at 104. In the ultimate selfless act, he sacrificed himself to save his friends when they needed him most. Please pay your respects with #RIPeanut pic.twitter.com/VFnEFod4Zp

“It is with heavy hearts that we confirm that Mr. Peanut has died at 104,” the company said. “In the ultimate selfless act, he sacrificed himself to save his friends when they needed him most. Please pay your respects with #RIPeanut.”

As Matt Walsh, Wesley Snipes and Mr. Peanut travel along a dangerous road with a sketchy rocky cliff on one side, an armadillo pops up in the middle of the road. Mr. Peanut is driving the NUTmobile and jerks the wheel to a hard left to avoid hitting the creature.

"He will be remembered as the legume who always brought people together for nutty adventures and a good time." #RIPMrPeanuthttps://t.co/HgV9mtRbdc

Unfortunately, that leads to the NUTmobile sliding out of control and driving off a cliff. Fortunately, though, all three of the guys managed to jump out of the back of the vehicle and grab onto a tree branch before falling to certain death.

However, the branch begins to break and Wesley Snipes tells Matt Walsh to let go of the branch and sacrifice himself so the others can live. Matt replies back telling Wesley to let go and neither are willing to do it. Mr. Peanut watching this gets a look in his eyes and Wesley can tell what he’s about to do and tells Mr. Peanut, “Don’t you let go.”

Without hesitation, Mr. Peanut tips his hat to the men and lets go of the branch falling to what appears to be his death. The end of the video shows “Mr. Peanut, 1916-2020” indicating that he in fact did die. So what does that mean? Did we lose him for good? Does Planters Peanuts plan to introduce a new mascot? Or is this all a marketing scheme to promote a new product?

We’ll all find out for sure on February 2nd during the Super Bowl. A press release states Planters plans to show Mr. Peanut’s funeral during the third quarter of the game. In the meantime, take a look at the teaser video below and watch Mr. Peanut’s heroic bravery.