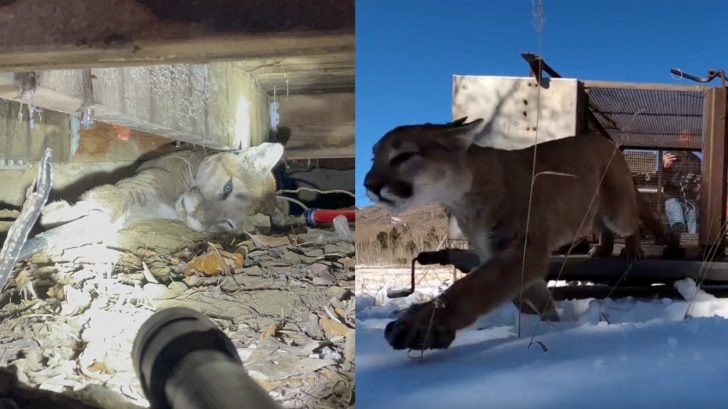 Colorado Parks and Wildlife (CPW) officers released a public statement on February 27th saying that a family’s dog found a mountain lion hiding under the porch deck of their home in Boulder.

Our Wildlife Officers in Boulder, with a big helping hand from @boulderosmp Rangers & @boulderpolice Animal Protection Officers, removed this mountain lion from under a deck at 23rd St. & Panorama Ave. this morning. pic.twitter.com/hMzfjO0RGY

The Boulder Police Department confirmed that they responded to a call from the family who said that their dog found the feline under the deck around 7:30 in the morning.

CPW arrived on the scene and found the big cat was still there hiding tightly under the deck in the same spot. From the photos posted to Twitter by CPW, you can see that they had to shoot it with a tranquilizer to safely knock out the dangerous predator.

Once pulled out from under the deck, the mountain lion was found to be a male weighing around 120 pounds, which is a little bit underweight for a male mountain lion.

Wildlife officials said that the mountain lion was transported to a remote location far away from the city and released back into the wild.

Why the double ear tag. Or was it already decorated with one? Good work. If you have a front on photo I can compare it to a shot from in the tree back on Jan.

CPW said there are about 3,000 to 7,000 mountain lions in the great state of Colorado and this was the 18th report of a mountain lion specifically in the city of Boulder since January 15.

According to Newsweek, the CPW wildlife officer, Tyler Asnicar, who tranquilized the cat said, “They’ve been spotted a lot in north Boulder. This may or may not have been one of those cats, but increased winter activity is fairly typical as they follow their prey base down, and particularly the mule deer that move into lower elevations this time of year. The cat’s concentration around the western edge of town and that leads to an increase in sightings and probably led to this cat being in town looking for something to eat.”

Sunday morning, wildlife officers relocated a mountain lion from under a deck in Boulder. The YouTube video linked here shows that relocation with a wildlife officer explaining what is taking place and what residents of #Boulder need to know.https://t.co/EGBWKC1xdG pic.twitter.com/XMj8fwat96

The department said that encounters with humans and mountain lions are very rare due to the fact that cats often run away as fast as they can and as far away as they can when they see people. Attacks are said to be even rarer.

Josh Rosenau who works with the Mountain Lion Foundation told Newsweek, “Any sort of danger to people [from mountain lions] remains incredibly rare. Like, comparable to the odds of your being struck by lightning on your birthday.”

CPW released a second video to Twitter showing the release of the mountain lion. From this angle, when the cage doors open, you can better see it lash out against the cage bars before bolting out the open door and running off into the forest.

Video of the mountain lion being released after it was relocated out of Boulder today. Details on the relocation ➡️ https://t.co/ZwgyiSRrot pic.twitter.com/aIwmo6Duyw