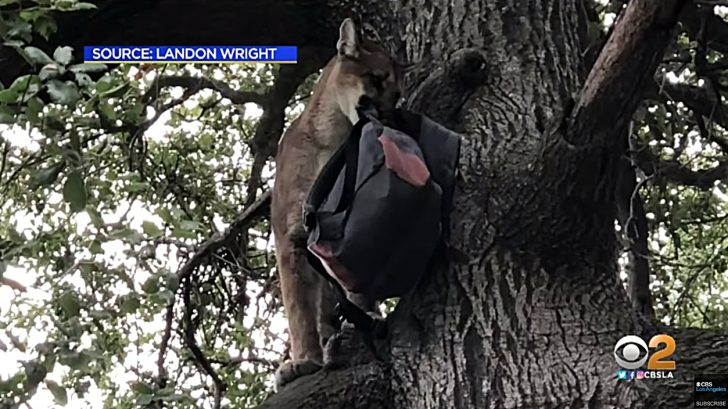 A family of six was hiking down a trail in California called Whiting Ranch Wilderness Park when a mountain lion came out of nowhere and grabbed a 3-year-old boy by the neck. The boy was said to have been walking a few feet in front of his father who instantly reacted by throwing his backpack at the lion.

This evenings mountain lion in Whiting Ranch: here are 2 videos filmed by us. If you follow this account you know that the goal is to educate people about animals and also provide cool photos for your enjoyment and our opinion may differ from the general public but that’s based on being knowledgeable about these animals and knowing their behaviors so we will give our insight here, take it or leave it. Based on reports of witnesses, a family of 6 was hiking in Whiting Ranch which is a known mountain lion hotspot, the family allowed their 3 year old to run way ahead of them which is a very obvious bad decision, a mountain lion will see an opportunity and do what it thinks it is supposed to do. We are very glad the child is ok and do not wish anyone to be injured but this should be a learning lesson that when venturing through the local wilderness, there are known dangers (lions, coyotes, rattlesnakes etc…) and we all need to be educated on how to act while in these areas and need to be aware of that, that would have likely avoided this whole situation. You can clearly see in this video taken moments after the attack that the cat is not in an aggressive state and was simply investigating what it thought was an easy opportunity but it obviously was extremely gentle because it could have easily killed the kid but didn’t. We do not support the decision to euthanize the cat but understand it’s in the general public’s best interest. PLEASE learn from this that we as humans need to educate ourselves on how to act while enjoying our local wilderness areas. In the lions mouth is the kids backpack

The lion was in the act of pulling the boy off of the trail but when the backpack hit the lion it dropped the boy and grabbed the backpack instead. It then took off with the backpack and climbed up a tree and stayed there as other hikers gathered around the family and the tree.

This all happened in broad daylight around 4:13pm on Monday, Jan 20th, 2019. The family got the boy out of there as soon as possible and took him to the CHOC Children’s hospital where he was later released that night with non-life-threatening injuries.

A 3-year-old male was attacked by a mountain lion within Whiting Ranch around 4:15 this afternoon. The child is in stable condition at a local hospital. Dept of Fish and Wildlife gave local law enforcement the approval to euthanize the lion due to the public safety threat.

As for the mountain lion, it stayed perched in the tree until the California Fish and Game officials got there and euthanized it due to it now being a threat to public safety. The hiking trail was temporarily closed down while the authorities scanned the area for more mountain lions just to make sure it was safe for people to start hiking there again.

Mountain lions usually hunt at night and avoid humans so it was rare that the incident occurred. The hiking trail, however, is known to have mountain lions and there’s very big signs at the entrance of the trail letting people know that this is “mountain lion country.”

New Report About The Mountain Lion Below