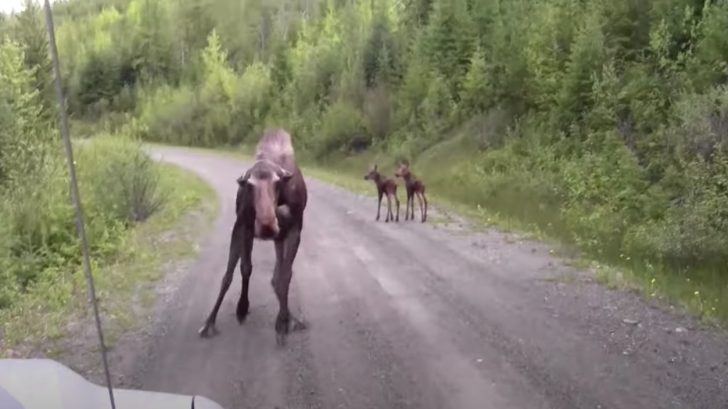 Have you ever seen a momma moose protecting her babies by blocking traffic on an old dirt road? Some men in a truck were driving down the road when they filmed exactly that!

The truck driver said he was driving down the road when he drove up on the cow moose and her calves. He slowed down the vehicle as he approached the animals due to them literally taking over the whole road.

The man wrote on YouTube, “We kept backing off hoping this cow moose with just leave the road, but after 15 minutes of waiting, we decided to try to squeeze by her.”

In the video, you can see the truck driver trying to drive past the moose family but every time he would get close to them, the mother would turn around and go into defensive mode.

“Each time we would try to sneak by her, she would get aggressive. Finally she rammed the truck several times, first with her head then with her shoulder,” he said.

Luckily for the people in the vehicle, the truck shielded them from her deadly attacks, and no injuries were reported, other than minor damages to the front of the truck.

The thing is, with predators everywhere in the nearby forest, the mother moose wasn’t taking any chances and refused to give up her walking spot on the road, forcing the man to have to fall in line and stay behind her.

The man wrote, “This ordeal took more than 15 minutes and nearly a mile of the road. Apparently there was a grizzly or wolves nearby because she simply would not take her calves off the roadway.”

Eventually, the moose and her calves moved over to the left side of the road just enough for the men to make one more shot at driving past them so the driver hit the gas.

As the men moved past, the moose rammed them again but they sped up and so did she. The mother moose ran beside the truck at full speed for a few seconds before she stops and the video cuts off.

Alaska Department Of Fish and Game wrote on their website, “Do you know what to do when a moose charges? Fortunately most moose charges are bluffs — warning you to stay back. But if a moose does charge, don’t wait to find out if it’s bluffing. Run and get behind something solid, like a tree, or retreat to a safe place, like inside a building or car.”

Watch The Exciting Moose Encounter Below