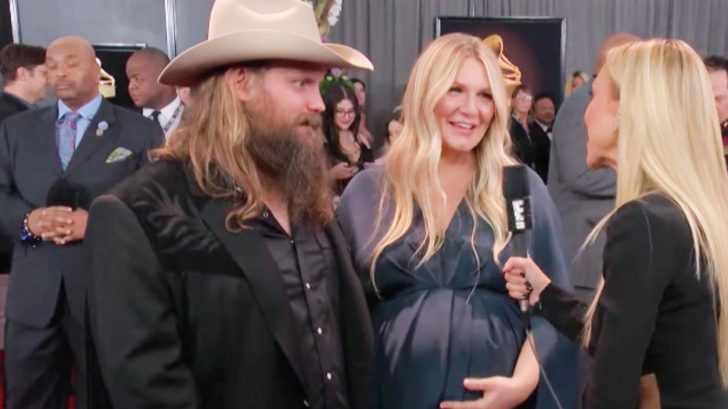 The Stapletons Expand Their Family

Chris Stapleton and his wife Morgane have watched their careers and their families grow exponentially over the course of the past few years. The former parents of two doubled the size of their brood in 2018 when Morgane gave birth to twin boys in the spring.

The notoriously private parents stunned everyone when Morgane willingly shared a photo of their twin boys on her Instagram. To date, we’ve still never seen a photo of the couple’s eldest children, son Waylon and daughter Ada.

Just seven months after the twins were born, Chris and Morgane had some exciting news to share with their fans. While performing at Madison Square Garden in November, Chris revealed that he and Morgane were preparing to welcome baby #5!

“I have an announcement to make. Some of you may know that we have four children,” he said. “Now there’s four for us, but we’re gonna make it five!“

Morgane has continued to perform with Chris throughout her pregnancy, and also walked the red carpet with him at the Grammy Awards in February. For those who haven’t been to one of Chris’ concerts over the past few weeks, the Grammys were probably the last time that you saw Morgane and her growing baby bump.

While the couple never revealed Morgane’s due date, we can assume it’s soon. If she waited until the end of her first trimester to announce her pregnancy news in November, that means that baby Stapleton should be here before summer!

Chris And Morgane Stapleton – The Cutest Couples At The 2019 Grammy Awards – Photos https://t.co/TTnI6Rc39Y

But since the couple likes to keep the details of their family life under wraps, we don’t know exactly when the new baby will arrive or if the Stapletons are expecting a boy or a girl. In fact, Morgane has gone through almost her entire pregnancy without offering up any updates short of making public appearances and playing at Chris’ shows.

That all changed on Thursday (March 7) when Morgane shared what may be her first true update on this pregnancy. While you can’t see her baby bump in the photo since it is securely snuggled up in a fleece jacket, you can tell from her caption how pregnancy is treating her at this stage.

The photo shows Morgane with her signature tambourine in hand, only she’s seated instead of standing by Chris’ side up front. “Rehearsals with a giant belly = tambourine playing from a chair,” Morgane wrote, accompanying her post with two emojis: a distressed looking smiley face and a pregnant woman cradling her belly.

You have got to give Morgane some serious credit for continuing to perform on stage as far along as she is in her pregnancy!

After years of performing by Chris’ side, Morgane has never tired of listening to her husband’s music. When she and Chris walked the red carpet at the Grammys, Morgane was asked how she feels about her husband’s love songs in particular.

She had the most priceless response, joking, “Yeah, we stay pregnant,” which got a hearty laugh out of Chris. You can watch that interview below, which is also the last time many people saw her baby bump on full display!