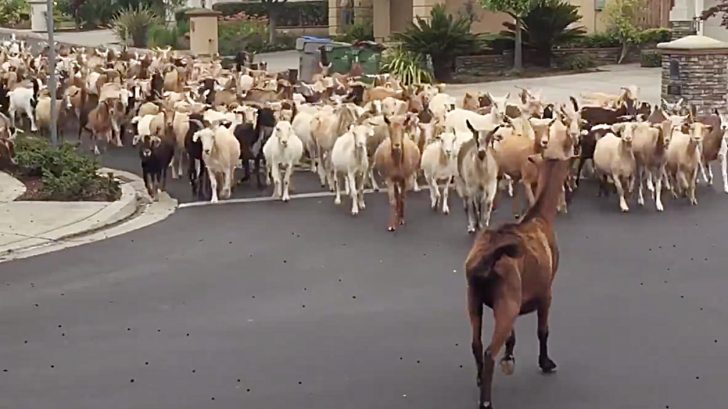 Who Let The Goats Out?

23-year-old Zach Roelands from San Jose, California said on his way home from the store he witnessed the craziest thing he’s ever seen during the quarantine. Apparently a massive herd of goats escaped a nearby farm and were spotted walking down the street he lives on.

The goats were originally brought in to be placed on a hill that’s behind his home to eat the tall grass. He said they do this three days a year to prevent wildfires from causing major damage to the nearby properties. About 15 years ago the hill caught on fire and ever since then they’ve used goats to keep the grass down.

None, they come by for 3 days a year to clear dead weeds off the hill behind our house

An electric fence kept the goats enclosed on the hill but when one of the goats was trying to reach a flower on the other side of the fence it accidentally touched the electric wire. The fence shocked the goat and made it jump which then caused other goats around him to jump too and they ended up breaking boards that held the fence up.

Once the fence was down and no one around to stop them, about 200 goats escaped their enclosure and made their way into the suburbs next to them. It was a crazy thing to see, according to Zach.

“I’m dead. When I got back from the store all the goats had broken through the fence and were recking havoc on our street. This is the craziest thing to happen all quarantine,” Zach wrote on Twitter.

Check Out The Video Footage Below

I’m dead ?☠️ When I got back from the store all the goats had broken through the fence and were recking havoc on our street

This is the craziest thing to happen all quarantine ??? pic.twitter.com/Hc7XpuiBdT