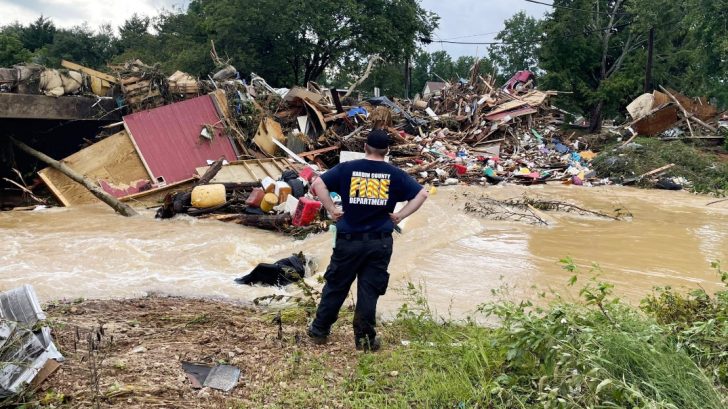 Severe storms and an immense amount of rain have caused deaths and significant damage across many counties in Middle Tennessee over the last couple of days.

Just in Humphreys County alone, the death toll has reached 22 people, with more than two dozen unaccounted for.

More than 17 inches of rain fell on the area in under 24 hours – which is the highest recorded one-day rainfall record for the state.

MAJOR (Historic) flash flooding this morning across Houston, Humphreys, Dickson & Hickman Counties in Tennessee. This is the view from Waverly, Tennessee where an estimated 8-12"+ of rain has fallen.

Officially, this has become the deadliest flood event in the history of Middle Tennessee, according to Krissy Hurley with the National Weather Service.

Among those who were killed was Loretta Lynn’s ranch foreman, Wayne Spears. The country singer’s ranch where Spears worked was hit hard by the floods and has suffered a great deal of damage – as have thousands of their neighbors.

Lynn’s daughter, Patsy, shared the news of Spears’ passing on Facebook (below).

Right now, Humphreys County remains the hardest hit in Middle Tennessee. The damage caused by flooding has forced one of Waverly’s water treatment plants offline – meaning many residents are without potable water. Currently, a “boil alert” is in place for folks.

Absolute devastation this morning in Waverly, Tennessee from major flooding last night. Local reports of over 17” of rain was observed. Photos from the Hardin County Fire Department. As of 8pm last night there were 10 confirmed fatalities and 31 missing. #TNwx pic.twitter.com/YZWZ317wQ4

The mayor of Waverly, Buddy Frazier, described the event, saying: “It was something like the quickness of a tornado I guess. Someone described it as a tidal wave.”

NBC News4 Nashville reports that the Waverly Public Safety Director, Grant Gillespie, has been able to reduce the number of missing persons from 40 to around 20 after using social media to help locate many displaced people.

Schools in the area remain closed as efforts are underway to locate the missing and stabilize local infrastructure.

On Sunday, August 22nd, 2021, Tennessee Governor Bill Lee addressed the impact of the flooding event during a press briefing.

“There’s much yet to know about what the end results will be. But what we do know is that it’s incredibly difficult, and our hearts and our prayers need to be for those communities, for those folks in that community, many of them who have suffered not only the loss of their homes and their property, but the loss of family members and friends,” Lee said, according to WATE.

I send my deepest condolences for the sudden and tragic loss of life due to flash flooding in Tennessee. We’ve reached out to the community and will offer any assistance they need in this terrible moment.

Our thoughts and prayers are with the people of Tennesse during this devastating time.