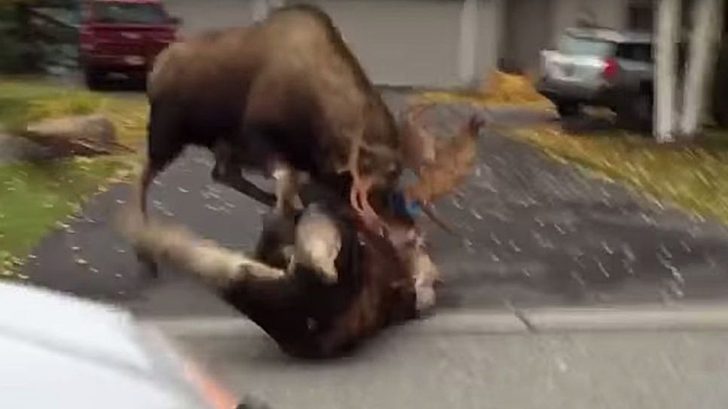 Back in October of 2015, National Geographic released some wild and crazy footage of two massive bull moose fighting it out in the middle of a quiet suburb in Anchorage, Alaska.

Footage showed the two moose locking their antlers together as they tried to push one another across a local’s driveway. A bystander stood behind a vehicle and filmed, along with other cars on the road who stopped to watch the battle.

It was incredible to see how they would strategically place themselves to get good balance and leverage to knock the other one onto the ground, or push them out of their territory.

They pushed each other all over the yard and clear out into the road where they crossed to the other side of the street and continued on battling right up close to the cameraman.

You can see that one of the animals even accidentally scraped up a 15-foot electrical cord or a dog chain in its antlers that was trailing along behind them. The moose also had some other things wrapped up in its antlers as well.

They pushed each other out into the middle of an intersection where one of them ended up getting better leverage and pushed the other one in such a way that sent it running out of the moose’s “territory.”

“Male moose tend to be more aggressive during this time of year, their annual rut cycle, when they spend virtually all their energy looking for females to impress and mate with,” National Geographic wrote on YouTube.

Watch Footage Of The Moose Battle Below