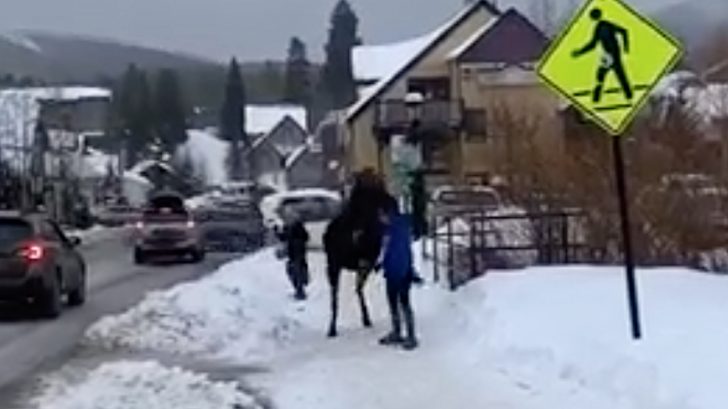 Anna Stonehouse, a professional photographer was visiting Breckenridge, Colorado, a town best known for its ski resort and year-round alpine activities last Thursday when she recorded a woman trying to pet a wild moose walking near the road.

“Everyone was screaming at her to get out of there,” Anna Stonehouse, said according to The Know Outdoors.

The 20-second video showed the moose crossing the road and a lady walking up to it and petting it on its bottom. The moose towering over the woman turns around and faces her. A man watching yells “get away from it” as the moose walks up and kicks at her with both its front hooves.

The woman realizing the danger she’s in steps back and begins to walk away. Luckily, all the moose wanted to do was eat from a nearby bush and disengaged the lady. Cars stop in the middle of the road to watch and some onlookers scream at her for trying to pet the animal.

Anna says she’s just glad the lady was not hurt.“I’m glad it didn’t knock her out,” she said. “I thought I was going to witness someone dying in front of me.”

Colorado wildlife officials continually tell people not to approach, touch or feed the wildlife that often venture into the state’s cities and public areas. You can watch this video below for yourself and is a perfect example of why you should follow the rules.

We can’t believe we even have to say this, but petting a moose is a very bad idea. ?‍♂️? Anna Stonehouse