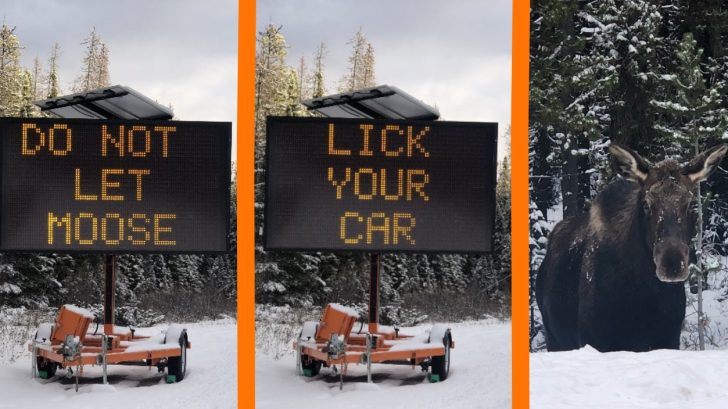 Authorities from Jasper National Park in Canada have placed a big sign on the side of the road warning people about moose that have apparently been deliberately walking up to people’s cars and licking the salt off of them.

Officials say that it appears harmless for a moose to lick the salt off the cars but it’s not good for their health nor what they normally have in their diet. They placed the sign up in places that moose are commonly found hoping people would help contribute to keeping the region’s moose population healthy.

According to Joe Urie, the owner of Jasper Tour Company, the moose find this road salt “kind of like crack,” Car Buzz reported.

This guy. We saw him both on our way to and from Maligne Lake. pic.twitter.com/16EGwWpEV7

To also push the agenda of preventing dangerous moose and human encounters, authorities have created a new rule that will be very expensive if people in vehicles disobey it.

Car Buzz shared, “As of this year, motorists may no longer leave their car if they encounter wildlife inside Jasper National Park.” In addition, they are not allowed to “feed, entice, or disturb wildlife in the park.” If they do, they “risk receiving a C$25,000 fine.”

The fine is equal to $20,000, which is definitely not a small fee. They hope this will keep folks in check and keep the moose safe. They also added that it is encouraged that drivers honk their hors at them to try and scare them away, however, never try to move them with your vehicle.

Video Of Moose Licking Salt Off Car Below