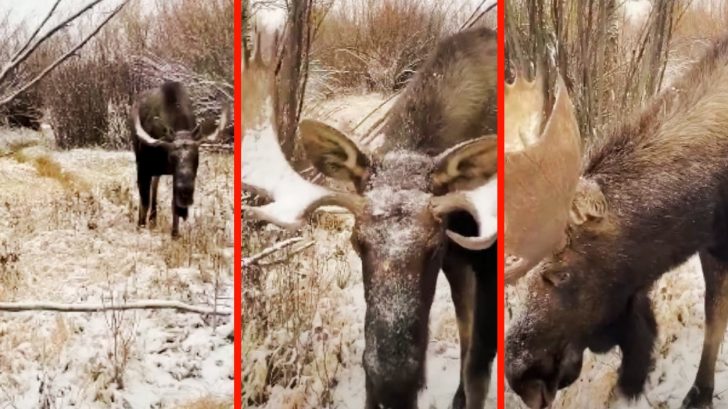 Anyone who has ever been in the presence of a moose can tell you they’re quite intimidating. As the largest member of the deer family, a moose’s size can make even the bravest adventurer quiver in their boots.

But one Montana man somehow managed to keep his cool when a large bull moose came within mere feet of him while he was out in the woods in late October. He shared a video of his encounter with the YouTube channel ViralHog.

“I was by myself going out for a deer/elk hunt on opening morning,” ViralHog quotes the man as saying in its description of the video. “I had just stood up to stretch my legs after sitting for a while. Off to the side of me, I noticed a set of antlers coming towards me, on the other side of the willows.”

The man soon realized that set of antlers was attached to a bull moose…which was heading right for him.

Slowly, the moose wandered over to the man until it was right in front of him. The man tried to remain calm as he kept filming.

“I stayed as still as I could while trying to control my breathing,” the man told ViralHog.

The man’s tactic worked, because the moose didn’t seem to mind him at all. It eventually walked past him and went on its merry way.

“I didn’t even look directly at the moose until he was past me, so it was nice to have the video to really get a good look at him after,” the man said when speaking to ViralHog. He described the encounter as being, “A little nerve-racking, but an amazing experience nonetheless.”

Head below to see the video the man filmed of his unforgettable moose encounter. He must have nerves of steel!