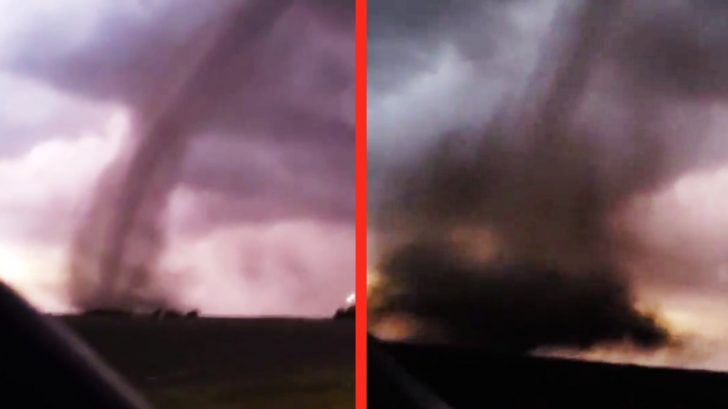 A sweeping storm cell spawned more than 20 tornados across six states on Monday, May 20th, 2019 and sparked some of the most powerful and terrifying tornados we have seen in recent years – and one man’s harrowing video shows just how scary they can be.

At the time the storm began surging across the US, expert Roger Edwards took to Twitter and revealed his deep-seated fears for the people in its path: “…this is the rare kind of event that may take many lives. Pray I’m wrong.”

Leaving shift this morning, scientific prediction done, a sobering, brutally honest realization hits: even if outlooks, watches & warnings are great, that doesn’t stop the #tornado swarm & destruction. This is the rare kind of event that may take many lives. Pray I’m wrong.

Luckily only a few injuries have been reported so far, including one person after a tornado touched down just outside of Tulsa International Airport on Tuesday morning (May 21st).

It flung a tree into a man’s home, trapping him inside. The extent of his injuries are unknown, but he is currently being treated.

Storm damage at the off-road track at the Lucas Oil Speedway in Wheatland, Missouri. pic.twitter.com/7BGwdgNSef

Time Magazine reported seven additional people were injured following storms that spawned near Lucas Oil Speedway in Hickory County, Missouri. Several were taken to local hospitals to be evaluated. The speedway itself sustained major damage and the brand new grandstands were leveled by the storm – which forced the cancellation of this weekend’s upcoming races.

The evolution of a tornado: awesome photomontage of eight images shot in sequence as a tornado formed north of Minneola, Kansas on May 24, 2016 by Jason Weingart pic.twitter.com/5KhNb9YF8F

One storm chaser’s insane video of a scary tornado that formed in Minneola, Kansas will leave you absolutely breathless – and have you wondering how he even survived.

Posted by KCCI News 8 CBS  in Des Moines, this rare one-of-a-kind video shows a storm chaser barreling down the road straight toward the path of this massive tornado. You can see the funnel stretch straight into the sky – thousands of feet up toward the clouds.

Debris is flying all around the vortex, creating a cloud of its own as he races down this road toward the storm. Lightning strikes in the background. And all you can hear is the swirling air whipping across the microphone.

It’s at that moment, that the storm suddenly surges straight in his direction and the wind debris makes almost everything blurry. You’ll wonder how he even survived.

Watch this harrowing video below and prepare to be shocked.