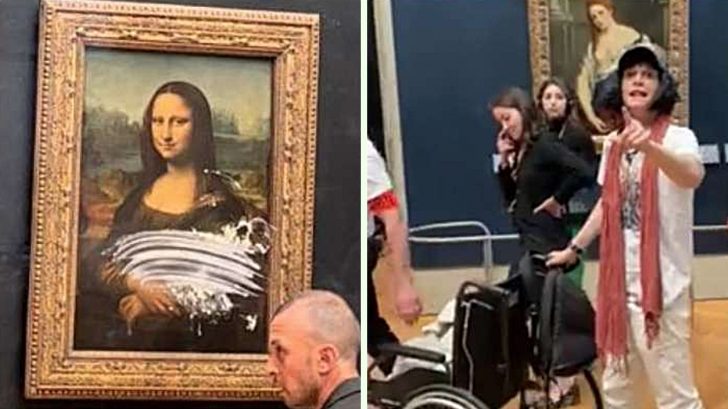 On Sunday (May 29), a young man disguised as an elderly woman in a wheelchair at the Louvre in Paris, France smeared a cake over the famous painting of the Mona Lisa.

Video taken by a 20-year-old witness, Luke, who later shared the video on Twitter, showed onlookers in shock as the man got up out of the wheelchair and proceeded to take a pastry and smear it all over the protective bulletproof glass that was shielding the painting.

Speaking to Insider, Luke said “it was shocking, to see something so historic vandalized” and that it “didn’t really seem real at in the moment.”

With gasps from all around the room, it didn’t take long before security came to tackle the guy who also threw some rose petals in the air before they started escorting him out of the building.

On his way, the vandalizer threw his hands in the air and started talking to Luke because he saw that Luke was filming him.

According to a translation by Insider, the man said “Think of the planet, there are people who are destroying the planet, think about that. That’s why I did it.”

Luke said, “Everybody seemed to panic a little but then applauded once the man was taken away.”

Luke noted how it was interesting how the man was able to sneak a pastry inside the museum by pretending to be a disabled old woman.

A museum representative confirmed that the world-famous Leonardo da Vinci painting was not harmed in any way during the incident and that the man wearing a wig and makeup, was arrested and placed in psychiatric care.

Watch Footage Of The Mona Lisa Below

Can anybody translate what ole dude was saying as they where escorting him out?? pic.twitter.com/Uy2taZ4ZMm