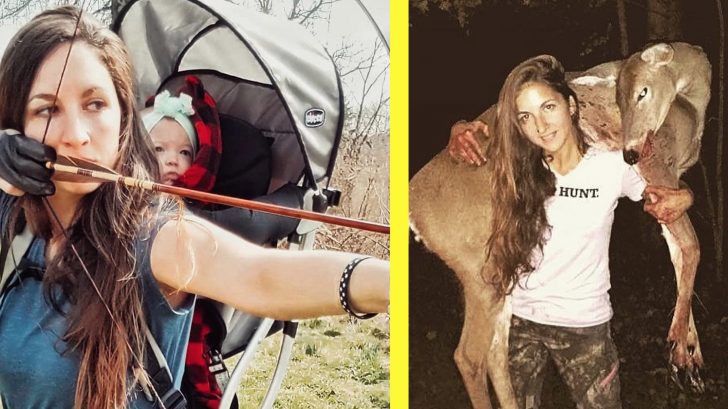 An outdoor enthusiast and a stay-at-home mom, 30-year-old Rebekah Stephens enjoys hunting with her baby strapped to her back – and she says she’s been taking her daughter hunting since she was a newborn.

“Everything I shoot is eaten or made into something. Furs, antlers, feathers, skulls – I try to use as much as possible and I think that’s important.”

“As far as what I use the animal parts for; I make them into home décor, clothing, wall mounts, blankets, anything useful that I can think of,” Rebekah said, according to The Sun.

Rebekah Stephens has been hunting since she was just 10 years old and was seven when she first went on a hunting trip with her father. That was the beginning of her love for the sport and it only has grown in the decades since.

When she became a first-time mother in August 2018 – Rebekah was interested in finding a way to continue hunting while also being a mom to little Isabella.

After sharing photos of her taking her daughter hunting, and with Isabella strapped to her back as she shot and killed animals – Rebekah started to experience a strong backlash from people on social media.

“I get quite a few anti-hunters saying things like, ‘How would you like it if someone hunted you and your baby?’ and other things along the lines of, ‘How can you teach an innocent baby such horrible things like hunting?’.”

She says that she tries to not let the comments bother her even though “it can be tough at times.”

“Hands down the best comment was from someone who lets me hunt in their property,” she explained. “He said that he thought it was great that I was getting my daughter involved in the outdoors at such a young age, and that it was great that I hadn’t stopped doing what I was passionate about just because I had a child.”

Rebekah says that she hopes Isabella will love the outdoors as much as she does and says that Isabella has always been well behaved when they were hunting.

What do you think about her choice to take her young daughter hunting? Let us know in the comments.