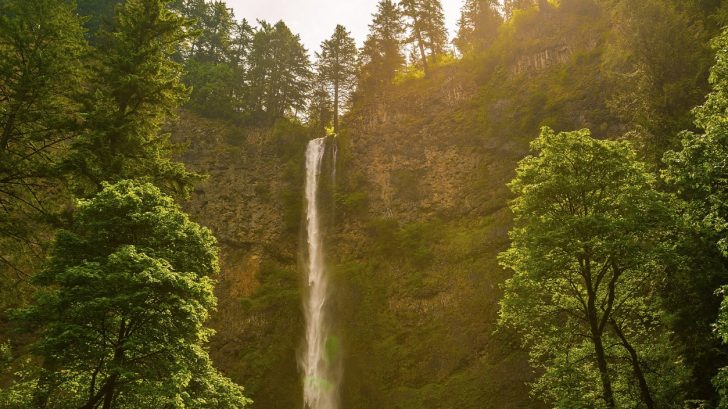 According to the Multnomah County Sheriff’s Office, on Sunday a two-year-old child and her mother survived a 100-foot fall while they were hiking on a trail outside of Portland, Oregon.

The sheriff’s office said they were hiking at Multnomah Falls around 12pm when the incident took place, which is located about 30 miles northeast of Portland.

The child apparently lost balance and started to slip and then slid off of the trail. The mother tried to help her child but they both ended up falling a long way down into a creek below.

Shane Roundy who was there and witnessed the event said that he heard them screaming and then ran into the water to help rescue them.

At this point, other hikers and an off-duty ER doctor who happened to be hiking that day joined in and helped Shane get the two taken to an area where they could be transported to the hospital.

A spokesperson with the Multnomah County Sheriff’s Office, Chris Liedle, told NBC News, “Both of them were alert and conscious. Neither of their injuries were life-threatening.”

They were both taken to the hospital where they received medical treatment for their minor injuries. Fortunately, they survived such a long fall and will live to tell the tale.

Officer Liedle explained, “It was initially reported to 911 the height of the fall was approximately 50 feet. After confirming where the two hikers fell, responders believe the fall was closer to 100-150 feet.”

That’s not the only child who has fallen off of the side of a cliff lately. Just the other day a 4-year-old boy fell off a 70-foot cliff and walked away with only scratches. Click here to read that story.