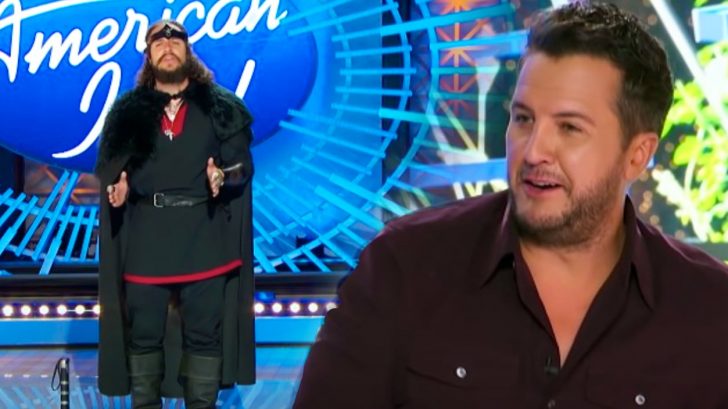 As Katy Perry said after Anthony Guzman auditioned for the 2021 season of American Idol, “Never judge a book by its cover.”

Guzman made an immediate impression on the Idol judges when he strolled into the audition room. He was wearing a cape, a headband, and tall boots, and also carried a Thor hammer.

“Would you consider yourself a Viking?” a fascinated Perry asked him.

“More of a modern Viking, honestly, but yeah,” he responded.

Perry said she was interested to hear how Guzman’s Viking persona would translate into his singing. She and the other Idol judges were surely expecting to hear him to have a deep voice that he’d showcase while singing something dark and powerful, perhaps from the rock genre.

However, Guzman left them flabbergasted when he opened his mouth and began crooning the song “Cry Me a River.”

First published in 1953, “Cry Me a River” was a popular song for decades. It was made even more popular when jazz/pop artist Michael Bublé included his rendition on his 2009 album Crazy Love.

His version of the song was later used in BBC’s advertising for the 2010 Winter Olympics. Bublé even had the opportunity to perform “Cry Me a River” in front of Queen Elizabeth II of England in December 2009.

Needless to say, Bublé’s rendition of “Cry Me a River” was the last thing the Idol judges expected to hear Guzman sing. Lionel Richie threw his pen in the air and stared in open-mouthed wonder and Luke Bryan exclaimed, “Holy h— that’s a curveball.”

Perry stood up in the middle of Guzman’s audition and began swaying side to side. She made it clear she was a fan of his smooth, suave voice.

After he finished singing, Perry uttered her “Never judge a book by its cover” comment before the other judges spoke.

Surprisingly, Bryan didn’t believe Guzman was deserving of a golden ticket to Hollywood. “I just didn’t really feel like it was like this huge artist moment yet for you,” he said before voting “no.”

But Perry and Richie both had faith him. “You can seriously sing,” Richie said.

Tune in to the video below to watch Guzman’s surprising audition. You can see how shocked the judges were when he started singing!