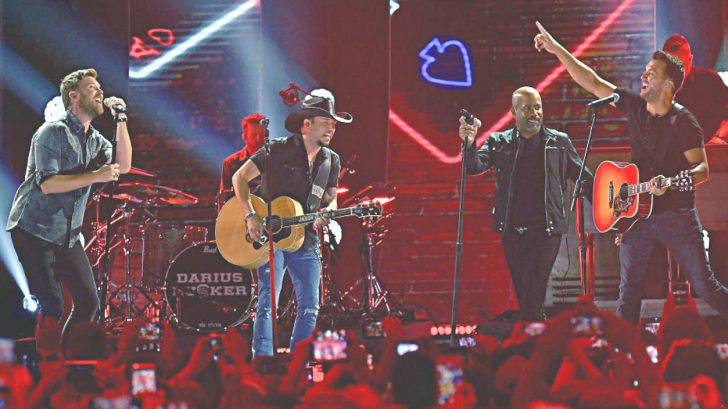 For 30 years, Darius Rucker desperately wanted to record a cover of a Drivin’ N Cryin’ song titled “Straight to Hell.” But for some reason, he never got around to cutting it.

Then, as Rucker explained during an interview with Taste of Country Nights, Lady Antebellum‘s Charles Kelley randomly called him one night to say how he just heard the song, and thought it would be great for Rucker.

“I thought that was the universe telling me to cut the song,” he said. “And at the end of it he’s like, ‘I wanna sing it with you!‘”

Once Kelley got involved, he suggested bringing Luke Bryan on board. Then Rucker tossed out an invitation to Jason Aldean to join them as well. Before they knew it, all four of them had teamed up for one massive collaboration.

Speaking about the song in his Taste of Country Nights interview, which took place in October 2017, Rucker shared his wishes for the song. “I hope some awards show or something gives us an opportunity to come out and play that,” he said.

Finally, months after he said that, Rucker’s dream got to come true when he, Kelley, Bryan, and Aldean were invited to perform “Straight to Hell” together on the CMT Music Awards.

Since the CMT Music Awards have always been known for their fun-lovin’ vibe, “Straight to Hell” was the perfect song for the four men to perform.

No one knew what to expect from the fellas’ performance, so when they opened their mouths to sing, we’re sure you were quite stunned to hear what sounded like an old-school country tune!

Seriously, this isn’t what anyone anticipated from these guys. It’s no wonder why people are still buzzing about this performance even weeks after the awards.

You’re sure to be entertained by what you see and hear from the guys in their CMT Music Awards performance of “Straight to Hell.” Check it out below!