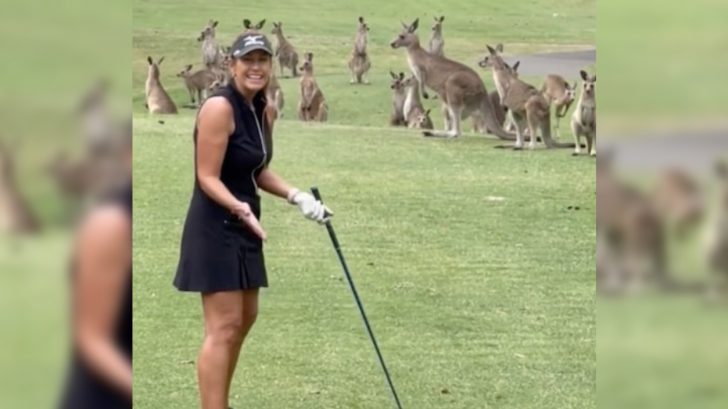 Amateur golfer Wendy Powick was out on the fairway polishing up her skills when a whole mob of kangaroos came hopping across the grass right in front of her.

The spectacle took place at the Arundel Hills Country Club about eight hours north of Sydney, Australia. Wendy said she was teeing off when the large animals began heading in her direction causing her to stop her game and watch them.

She said she was just about to swing her driver on the 11th hole when they showed up and all she could do was laugh about it and wait for them to get out of the way.

They were most likely just looking for free food. There were about 20 of them and they were bouncing all over the place.

“Never ever seen this happen before when a whole mob of Kangaroos at Arundel Hills Country Club on the Gold Coast decided to charge up the fairway and stop right at the front of the Tee box to watch me,” she wrote on Instagram. “Absolutely gold and only in Australia.”

Fortunately, after realizing there weren’t any free food handouts, the kangaroos hopped off in one big group just like when they came and left the fairway so that she could continue her game of golf.

“There’s a lot of them at this course,” Powick said of the kangaroos to 7News.“Usually they stick to the sides and watch you play.”

Watch The Kangaroos On Golf Course Below