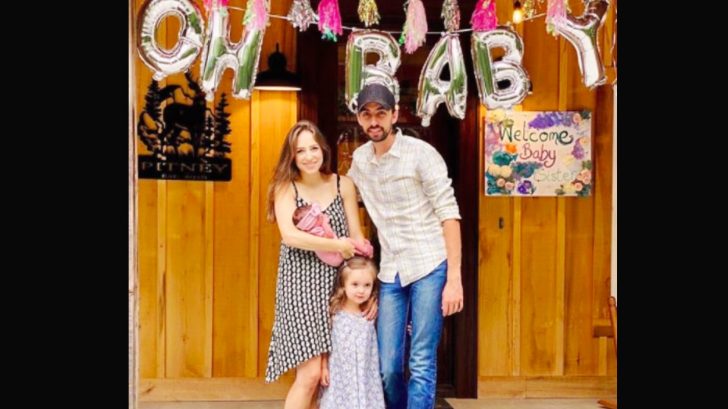 On Christmas Day in 2019, Mo Pitney and his wife, Emily, announced they were expecting their second child.

“It’s been a super special Christmas over here in the Pitney family!!” Mo wrote on Instagram. “Evie is so excited to be promoted to big sister…Baby Pitney coming Summer 2020!“

Mo also shared a picture of him and Emily placing their hands on her baby bump while their daughter, Evelyne Nadine, sat next to them.

It’s been a super special Christmas over here in the Pitney family!! Evie is so excited to be promoted to big sister ❤️ Baby Pitney coming Summer 2020! Thanks to @tasteofcountry for helping us share the big news! Link in bio. ?: @hollyaudramccubbin

“I wanted to have the baby a little bit sooner but we waited a bit,” Mo said in a December interview with Taste of Country about the pregnancy news. “We did it the right way. Our hearts decided.”

In January, Evelyne celebrated her third birthday. That same month, the Pitneys found out if she would have a baby brother or a baby sister.

Emily shared a gender reveal video on her Instagram on January 1. The video shows her, Mo, and Evelyne unwrapping a Christmas present to reveal a set of ruffle-covered onesies with unicorns.

The Pitneys anxiously awaited the arrival of their second daughter this summer. Finally, on July 14, Emily gave birth to a beautiful baby girl!

Mo and Emily first shared the news with Taste of Country on Monday (July 20).

“Emily’s delivery was pretty difficult and long this go around due to the position of the baby,” Mo said.”[Emily] absolutely amazed me at her ability to face the labor pains. I couldn’t be more proud of her.”

The couple also revealed their baby’s name…Audra Elaine Pitney. Her name carries a family connection, since “Audra” is the middle name of Mo’s sister, Holly.

Meet Audra Elaine Pitney. ?? Check out @tasteofcountry for our announcement!

As for how Evelyne is adjusting to her new role as a big sister, Mo said she “is the best big sister in the world.“

“The first night home, I took the baby into Evie’s room before she went to sleep and we all cuddled for about 45 minutes while Evie patted Audra’s head and told her that everything is gonna be all right and God will always be with her,” he said. “She also said…I’m your big sister and we will be sisters forever.”

How sweet is that?

Emily made her own post on Instagram to announce Audra’s arrival, and posted a picture of her. You can view that photo below.

Welcome to the world, sweet Audra Elaine. ? 7-14-20 Thanks to Taste of Country for helping us share the news! Link in bio.

What a precious picture! We’re sure Mo and Emily are enjoying every second with their sweet bundle of joy.

Congratulations to Mo, Emily, and Evelyne on their new addition. Audra is adorable!

See Emily and Evelyne star in Mo’s recent music video for “Ain’t Bad For A Good Ol’ Boy” below. Maybe we’ll get the chance to see Audra in a music video some day too!