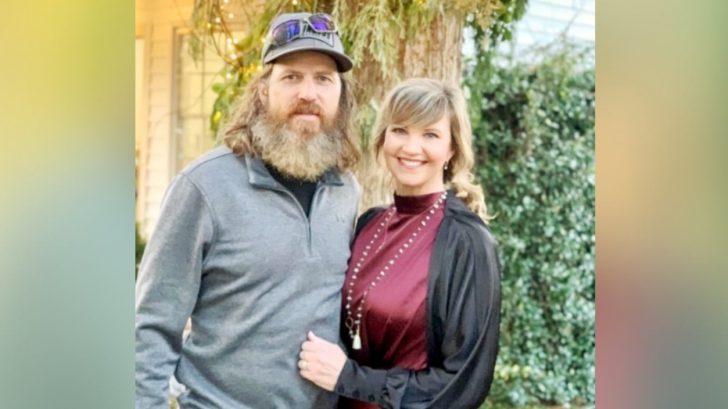 During a recent episode of the Unashamed podcast, Duck Dynasty star Jase Robertson revealed he and his wife, Missy, have taken in a baby boy. They are now caring for a newborn 18 years after the birth of their youngest child.

Missy was a guest on Unashamed when Jase disclosed this information. She and Jase shared how the baby boy ended up with their family.

Missy said a woman their family had “ministered to in the past” gave birth to a baby boy in jail. Without Missy knowing, the woman signed her son over to her:

“I said, ‘Do what? I’m sorry I didn’t quite hear that correctly,'” Missy remembers thinking. “I had the media stuff I was doing. We had meetings in town. [Jase] was getting ready to go on a trip for metal detecting. All of this is happening and I literally don’t even have the time to process it in my brain. I don’t know how to make a decision about this, I’m trying to gather information.”

Missy spoke with the social worker when the baby was only two days old. He was ready to be released from the hospital and needed a home. So Missy approached Jase with everything she had learned.

“When I told him I didn’t know what his reaction was gonna be,” she said. But Jase’s reaction was positive, so they welcomed the baby boy into their lives.

Jase said they aren’t sure if they’ll be adopting the baby. Their greatest wish is that the boy’s mother will “get her life right.” In the meantime, they “want to put this baby in the best place to succeed in life.”

The day after the podcast was released, Jase gushed about Missy on social media. He shared a photo of her posing with her new children’s book, which is all about the power of unconditional love within a family.

He pointed out how fitting it was for her to be releasing the book as they welcomed this baby boy into their lives:

“Missy was literally explaining to multiple media outlets about the unconditional love outlined in her new children’s book when she got a call that a newborn had suddenly been left in our care,” Jase said. “We felt like this baby fell right out of the sky and Missy was there to catch him. What an honor to be asked to step in the gap and show this baby and his mother the unconditional love of our Father.“

A few days later, Missy opened up about what it’s been like to care for the newborn they’ve welcomed into their lives. She said they’ve even sacrificed time with their own infant granddaughter, Merris, in order to care for the baby boy:

“What words could I possibly write to adequately describe taking in a tiny newborn life into our home when we didn’t even know he existed?” Missy said. “In the middle of a national book tour, filming a new tv series (more on that later), and traveling back and forth to spend time with our first grand-baby who is also a newborn, @realjaseduckman and I decided this little nugget’s life was too important for us to look the other way. To be clear, we had to juggle and sacrifice a few things, and I’ve missed my time with my sweet grand-girl Merris (I’ve cried a few tears), but we feel like the Lord is using us in a way we have never been called to before now.”

Missy said she and Jase have no clue what the future has in store for the baby boy that’s now under their care. But she says they are putting all of their trust in God:

“…we are trusting that the Lord will guide our steps, guide his mother’s heart and surround him with a protective hedge of angels all of his life,” Missy said. “Our friends and family are amazing! He is being loved on, showered with gifts and being prayed over 24/7. He is a gift. How long he will be in our care we do not know. We trust the Lord has him in His hands. We feel blessed to stand in the gap.”

You can read Missy’s full post below. She also shared a photo of her cradling the newborn, but you can’t see his face.

Our prayers go out to Missy, Jase, and their whole family. They’re doing an incredible thing for this baby boy!