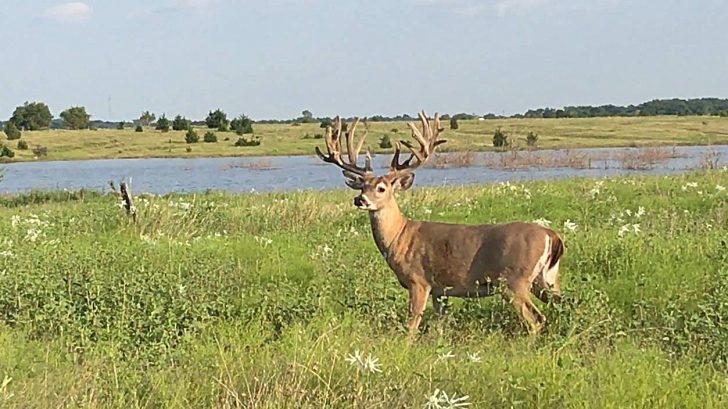 R. P. Farr from West Point, Mississippi has been praying to harvest a massive 150-inch buck for a long time but he got the surprise of his life when he took down something much bigger.

Farr said that he first spotted the buck on trail cameras he had set up but he only saw the buck at night time. He said his trail cameras captured pictures of the deer on three different nights about two weeks before he shot him.

Even with the pictures, Farr said he wasn’t exactly sure how big he was or how many points he had. He knew he had a lot though. Farr’s friend told him he’d never get a shot at him because it appeared the buck only ventured out at night.

On December 17th, 2019 Farr headed out early in the morning right before the sun was about to come up and got set up in his deer stand. He said he saw several bucks and does running around as he looked over an old field road. As he watched a few does come out into the field that’s when he saw the big buck from his trail cameras.

He only had a few seconds because the buck was trotting across the field to catch up with the does. However, for some reason, the buck decided to stop for a second and looked directly into Farr’s direction. That’s when Farr said he let the bullet fly.

“He just stopped and looked back in my direction,” Farr told Clarion Ledger. “That’s when I shot him. He dropped right there. The good thing was I didn’t have time to get nervous. All I thought was, that’s him and I got to shoot.”

It wasn’t until he had the antlers in his hands that he realized how big the buck was. His friends were telling him to enter the deer into a big buck contest and that his inches would be around 190 in which Farr didn’t believe would be true. However, after officials measured the deer they found that the mainframe of the buck scored 167 but the entire spread was a whopping 201 inches.

Farr was definitely shocked saying that he never dreamed of getting a 150-inch buck much less a 200-inch nontypical buck. He doesn’t believe he’ll ever do better than this in his lifetime but says that won’t stop him from staying in the hunt.