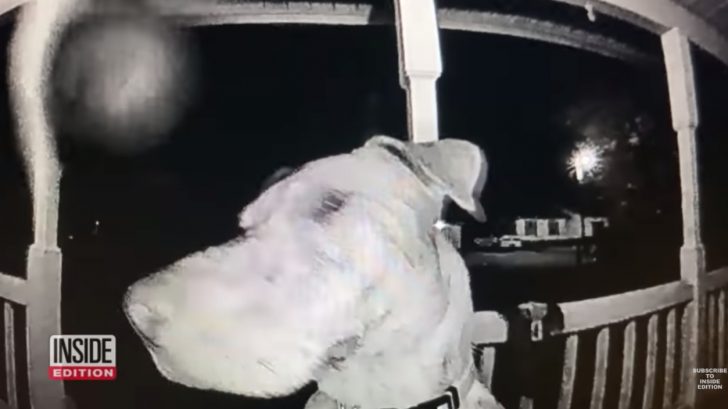 A dog in Greenville, South Carolina ran off from its home and went missing for several hours after a neighbor set off some fireworks. The dog returned later, muddy, covered in poop, and eager to meet its family again.

According to the dog’s owner Mary Lynn, the dog’s name is Rajah. Lynn told Poeople that, “She was in the backyard with our other dog, and our neighbor started shooting off fireworks, and I knew she’d be scared. I went to the backyard — and she was gone.”

23-year-old Mary Lynn immediately created a Facebook post to let her community know that 18-month-old Rajah was missing. She and her husband Ryan drove around the neighborhood calling her name, looking for her, and recruiting people to help them search.

Mary Lynn said, “My husband came home, and I was driving around looking for her. We were ready to call all the shelters, and she just showed up and rang the doorbell.”

Rajah finally returned back to the home around 3am and rang the doorbell. Video footage showed the pup licking the camera and pressing the doorbell with her face in an attempt to get her owner’s attention.

“I don’t even know how she knew how to do that. I’ve never shown her how,” Mary Lynn said. “She doesn’t go out in the front yard except to the car, so she’s never seen us use the doorbell. Ryan was up waiting around to see if she’d pop up. He saw her on the porch, and he ran off and got her.”

Her owners said that when she returned, she looked afraid as if she had done something bad. She was dirty and smelled really bad, but they did not care. Mary Lynn said they were just happy to see her.

“She thought she was in so much trouble, and she was sad and sulking, but we were like ‘we’re just happy you’re back,'” Mary Lynn said. “It was hilarious, and we couldn’t stop laughing.”

Hear The Couple’s Story Below In Video Interview