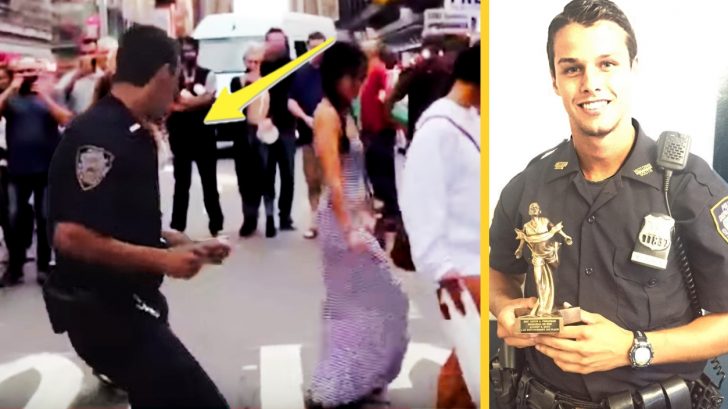 Years before one of NYPD’s finest and country singer Miranda Lambert even met – his wicked good line dancing skills were already an internet sensation after a bystander captured him doing his thing while on parade patrol.

Lambert, who revealed her secret wedding to police officer Brendan McLoughlin in an Instagram post just after Valentine’s Day in 2019, first met the hunky first responder while she and her Pistol Annies members played on Good Morning America.

Everybody who has been to a wedding since 2007 knows that folks all like to line dance to the hit song “Cupid Shuffle” and it’s a sensation that has swept the nation. Playing the song at parties, gatherings, and big events is very common – and the dance is addictive!

Well, during the 2015 NYC Pride Parade, Officer Brendan McLoughlin broke out his own line dancing moves when he heard the “Cupid Shuffle” come on the speakers where he was patrolling.

Folks all around quickly whipped out their cameras and began recording this cop’s sizzling line dancing moves and a crowd of dancers joined in.

“Cops have fun too!” one of the people filming captioned their video.

It’s clear that many were impressed by the future Mr. Lambert and his smooth moves. We can only bet that this was a selling point for Miranda herself!

“I wanna know who taught that boy to move like that!!!” Another user commented.

The 29-year-old officer was doing foot patrols around the GMA studio for years and obviously enjoyed interacting with the public while on the street beat.

Because of his new life with Lambert, he has officially retired from the NYPD.

Check out these two videos of him dancing that have earned hundreds of thousands of views!