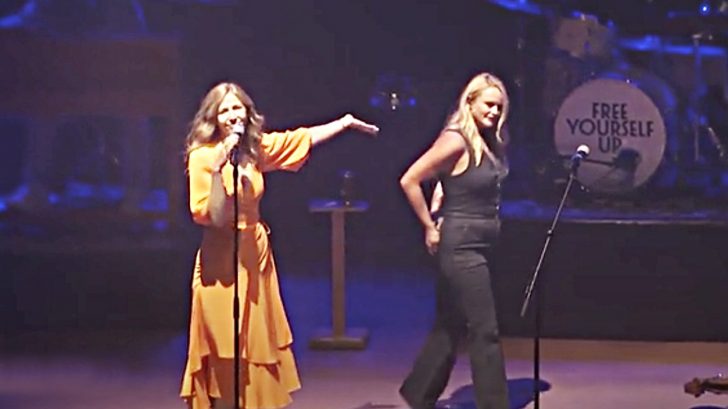 Miranda Lambert decided to surprise a few friends (and a whole room of fans) when she made a truly unexpected appearance at the famous Red Rocks Amphitheater in Colorado.

During the concert on September 6th, 2018, Miranda joined the soulful folk-rock band, Lake Street Dive on stage during their first time headlining at a famous venue.

The band’s lead vocalist, Rachael Price, invited Lambert on stage letting the audience know, “We’ve got a special new friend with us tonight, and I really want her to sing this song with me. Some of you might know her…we’re going to invite Miranda Lambert out for this next one.”

Just the mention of the name “Miranda Lambert” sent the crowd into an absolute frenzy. It took a moment for the audience to settle down before the ladies could start singing – but when they did, it became a magical moment. Price’s deep, echoing voice perfectly accompanied Lambert’s twangy vocals as they sang together on Lake Street Dive’s striking ballad “I Can Change.”

Lambert had been in the area for Dierks Bentley‘s Seven Peaks Music Festival and decided to stop by to sing alongside these talented rising musicians. Despite having several other projects going on – including some big projects with the Pistol Annies, it is nice to see that Lambert still keeps her country values and supports other artists.

Since the show, the musicians have continued to show their respect and love for each other all over social media. Lake Street Dive was “floored” by Lambert’s kindness and posted this vintage-looking image of the country star with the band.

As if headlining @redrocksco for the first time couldn’t be more magical, @mirandalambert showed up, and then graced us with a DUET! We were floored and graced with her kindness! ????

And the love was mutual! Miranda called Lake Street Dive “one of [her] favorite bands” and posted a few behind-the-scenes pics.

Last night I got to see one of my favorite bands with some of my favorite people! Thanks @lakestreetdive for letting me saaaang with y’all. Such an inspiring night of music! #redrocksamphitheater #fangirl?#freeyourselfup @redrocksco

We love seeing such talented artists support each other and show such amazing respect for anyone in the industry.

To see the entire, powerful performance – check out the video below and let us know what you think about Miranda Lambert’s surprise appearance!