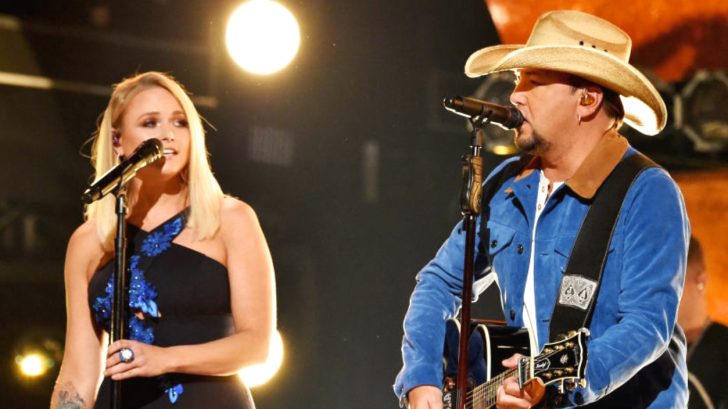 So Much Was Happening At The CMA Awards

Country fans all over the globe are still trying to take in everything that happened at the CMA Awards on Wednesday night (November 14).

Carrie Underwood revealed her second child is going to be another boy, Keith Urban took home his first Entertainer of the Year win since 2005, and Garth Brooks debuted a brand-new song that brought himself and Trisha Yearwood to tears.

. @garthbrooks debuting his brand new song “Stronger than me” at the @CountryMusic awards!#CMAawards https://t.co/5z7x3iGxIh pic.twitter.com/KDTTVGh5pY

In the midst of all that, y’all missed something huge during one of the night’s performances. And it was right in plain sight!

Early on in the night, Miranda Lambert took to the stage to perform her multi-nominated collaboration with Jason Aldean, “Drowns the Whiskey.” It was during that performance that a few eagle-eyed fans first noticed what appeared to be a new tattoo on Lambert’s arm.

It’s a well-known fact that Lambert is fond of tattoos. She has several, with many of them being small enough to be barely noticeable.

A few of her tattoos include a tiny arrow and a music note, which appear on her hand and wrist, respectively.

Don’t Worry About Her Famous Ink – It’s Still There!

But the most famous of Lambert’s tattoos is also one of her largest (now probably the second largest with the edition of the new ink). The pair of pistols and wings is now recognized as one of Lambert’s signature symbols.

Love this pic! An award with one of my biggest inspirations! Thanks Keith!

At first, when fans spotted Lambert’s fresh ink at the CMA Awards, they were concerned it was covering up her guns and wings tattoo. But from what we can tell, it seems that the tattoo is entirely new, and appears to be on the opposite arm.

The artwork is hard to see in photos and videos of Lambert’s “Drown the Whiskey” performance and her later collaboration with the Pistol Annies. But one fan managed to zoom in on Lambert’s arm and got a pretty clear photo of her fresh ink.

You’ve Seen The New Tat Before

From the looks of it, Lambert’s new tattoo embodies the traditional style of playing cards, with a queen figure in the center and a heart in the corner with the letter “M.” It’s an interesting design, and we’d love to hear Lambert explain the meaning behind it.

Interestingly, this isn’t the first time you’ve seen Lambert’s new tattoo. She already had it during CMT’s Artists of the Year event in October, and didn’t try to hide it at all.

Seriously, how did this go unnoticed for so long?

Now, tune in to the video below to rewatch one of Lambert’s CMA Awards performances and see if you can spy her new tattoo. Did you notice it before it was pointed out?

What do y’all think of Lambert’s fresh ink? Which one of her tattoos is your favorite?