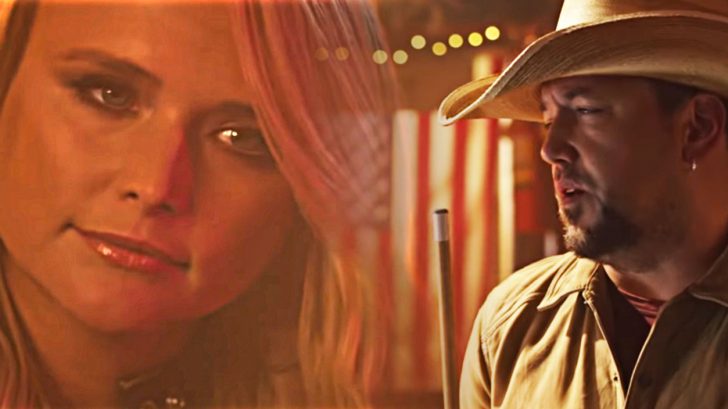 The whiskey is supposed to drown the memories…but that’s not strong enough for a broken heart.

Taking center stage in Jason Aldean‘s video for his hit song, “Drowns The Whiskey,” longtime country star Miranda Lambert appears as a heartbroken gal who has been trying to drink away the memories – exactly the same thing that Aldean’s character has been doing, too.

“Whiskey’s supposed to drown a memory…and the thing that really gets me – is how your memory drowns the whiskey.”

Both Lambert and Aldean find themselves in the same dive bar, drinking whiskey to chase the memories, but they can’t seem to get their former lovers out of their heads. The camera pans across the bar as Aldean begins singing the song and shows Lambert in the background with a glass of whiskey in her hand and a heartbroken expression on her face.

"Drowns the Whiskey" by Jason Aldean is a song that is sung with Miranda Lambert and it reminds me of a Kenny Rogers + Dolly Parton duet from the early '80s. I love songs that tell stories, which is what draws me to country music. ♥️

After a few different lines of the song they sing together, the video makes it appear that the two meet one another at the bar – and try to use the company (and whiskey) to get past their broken hearts.

While they play pool, cards, and laugh over drinks, the video makes it appear that this could just be a dream world both are experiencing.

Together, their voices sound as good as ever with this mournful ballad and their harmony is a perfect example of how skilled both these artists are.

Watch the full video below as well as the behind-the-scenes clip.