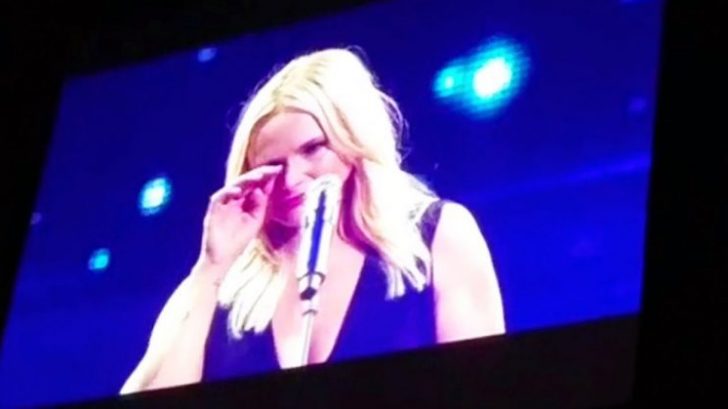 It isn’t unusual for Miranda Lambert to get a bit choked up when she sings “The House that Built Me” during her concerts.

Since the song is emotional by nature, it’s one that has the power to move the entire audience to tears.

But there was something about her performance of the song in 2016 in Hartford, Connecticut that was extra special for all present.

As she performed the song, Lambert spotted someone holding a sign up in the crowd, and as soon as she saw it she brought it on stage. Fans write on signs and bring them to concerts all the time, declaring their love for the artist on stage or saying how far they’ve traveled. But the person who held up the sign in this particular audience had come quite a long way.

Lambert showed the sign to everyone in the crowd, and that’s when the tears started flowing.

It turns out that the fan holding the sign was a soldier, and his message to Lambert read as follows:

“3 combat tours…your voice was the last thing I heard every night. Thank you.”

Tears streamed freely down Lambert’s face as she displayed the sign for the crowd, and a video from the moment shows the soldier crying as well. In fact, we’re sure there wasn’t a single dry eye in the room when this happened.

She Couldn’t Complete The Song

Lambert was so emotional that she couldn’t even finish singing “The House that Built Me,” so she let the crowd do it instead. What a powerful moment.

The official music video for “The House that Built Me” is also a touching thing to witness. Even though it was a staged production, the emotion that Lambert poured into it was real and raw.

You can see just what we mean when you watch that video below.

We feel like it’s safe to say that “The House that Built Me” will be one of those timeless country songs that will continue to resonate with country fans for many generations to come.