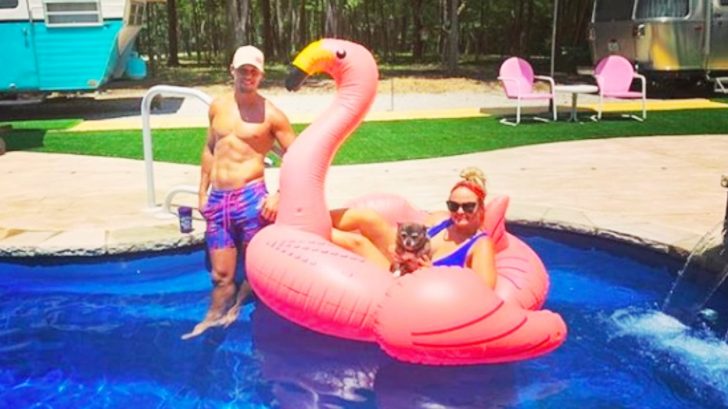 Miranda Lambert and her husband, Brendan McLoughlin, have spent the past few months traveling.

Back in early May, Miranda shared the news that she and Brendan purchased a 2020 Airstream Globetrotter. They dubbed the trailer “The Sheriff,” and Miranda said she and Brendan planned to take trips “all over the country.”

“I know that seeing the world through the windshield again will bring creative vibes,” Miranda said, referring to her songwriting.

Sunday thoughts. When people ask me questions about all the traveling I’ve done , my answer is pretty much the same every time. “ I’ve been everywhere but I haven’t seen much of anything. “ I’ve been touring for 19 years and most times we just roll in , play our show , and roll to the next town. I’ve only gotten to spend some real time in a few of the places I’ve been. After spending these last few months at home ( a much needed break and time to nest❤️) I realized something. Just because I can’t travel and play shows doesn’t mean I can’t travel and make music. I have the most amazing travel companion, my husband , and we decided to add a family member. Y’all Meet “The Sheriff . “ A 2020 Airstream Globetrotter. ( thanks @rocketcityrv ) I’ve been a vintage trailer collector for years and this is my very first new one. I’m letting go of a few vintage to make room for adventure in this silver gem! I don’t like change but I’m learning to embrace it. Until I get get back on Elvira and tour, I’ll be pulling this rig all over the country. I know that seeing the world through the windshield again will bring creative vibes. #highwayvagabonds #livinlikehippies #BandMetour

Miranda and Brendan remained true to their word, and have already taken The Sheriff on multiple trips. They went to New York in mid-May to visit Brendan’s family, and traveled through four states in the process: Tennessee, Virginia, Pennsylvania, and New York.

The couple later traveled to Texas, where Miranda is from.

While in Texas, Miranda and Brendan rescued a one-month-old kitten they found on the side of the highway. They named him “Tequila.”

“This kitten rode 9 hours back to Nashville with us and 3 dogs and was such a champ,” Miranda wrote when she introduced Tequila on Instagram.

Two lane highway in Texas, speed limit 70. Brendan slows down and does a U-turn… Me to B: “why are you turning around? “ B to me: “there’s a kitten in the road and I knew you would kill me if I saw it and didn’t stop.” Well I guess the rescue ways are rubbing off on him. ??We stopped at mom and dads on the way home. Dad has a new bestie. This kitten rode 9 hours back to Nashville with us and 3 dogs and was such a champ. He is 4-5 weeks old and weighs 14 Ounces. ??. Y’all welcome Tequila the kitten to the family! #tequiladoes @muttnation

After taking so many road trips, Miranda and Brendan paused to enjoy a relaxing 4th of July.

Miranda and Brendan donned red and blue swimwear and hopped in the pool for a snapshot Miranda posted on Instagram. Brendan showcased his fit physique while standing next to Miranda, who was lounging in a flamingo pool float.

The couple was joined by one of their eight dogs, Delta Dawn, who sat in Miranda’s lap for the picture.

“Happy 4th y’all!!!” Miranda said in her 4th of July message. She then encouraged people to look out for their furry family members, since many dogs and cats are spooked by the sound of fireworks.

Check out Miranda, Brendan, and Delta Dawn’s 4th of July photo below.

It seems fitting that Miranda was wearing a blue swimsuit in her 4th of July photo, because her song “Bluebird” is currently soaring up the charts. It recently became her first Top 5 solo single on the Country Airplay chart since 2014.

Watch the official music video for “Bluebird” below.

We hope Miranda, Brendan, and all of their pets had a happy 4th of July this year!