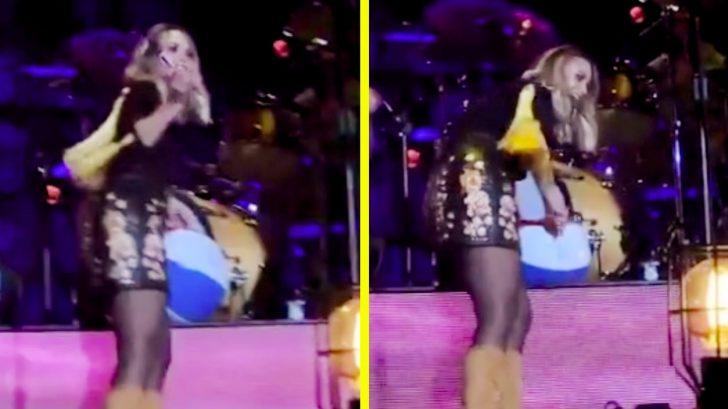 Word of advice…if you ever attend a Miranda Lambert concert, don’t bring a beach ball with you.

The “It All Comes Out in the Wash” singer has vocalized her dislike for beach balls since the early years of her career. While touring with Kenny Chesney in 2009, Lambert told Dial-Global why she always gets annoyed when she sees a beach ball in the crowd at one of her shows:

“I hate beach balls,” the singer told the publication, as quoted by The Boot. “I just feel like people are so distracted from the music when they’re trying to worry about a beach ball hitting them in the head and bouncing around like a volleyball. And people down front get hit in the back of the head, because they don’t see it coming.”

A Miranda fan should know better than to bring a beach ball unless they were wanting that ball to get attention, lol.

Lambert spoke about one time that a beach ball finally made her snap. She said one made its way on stage while she was singing “Gunpowder & Lead,” and that it hit her in the face.

In response, Lambert took the heel of her shoe and popped the ball in the middle of her song. After that experience, she came up with a solution to handle any future stray beach balls at her shows.

“I started keeping a knife on the drum riser for occasions just like that!” she said.

In 2016, Lambert popped a beach ball mid-show with a knife necklace that her Pistol Annies bandmate, Ashley Monroe, had given her. “I’m sorry, very sorry for whoever’s ball this is, but it’s gonna die now,” she said before stabbing the ball on stage.

So when a beach ball came into Lambert’s line of sight during her concert in Pennsylvania in September 2019, fans knew that ball wasn’t going to live for long.

As soon as the ball made its way toward the stage, Lambert quickly took action. She carried the small beach ball over to the drum set, where sure enough, she kept a knife. After popping the ball, she walked back to the front of the stage and addressed the crowd.

A fan happened to capture the moment on video, which you can watch below

What do y’all think about beach balls at concerts? Do you love them, or hate them? Clearly Lambert is not a fan!

this was such a Miranda Lambert thing to do ?? pic.twitter.com/LEZgRYXZBQ