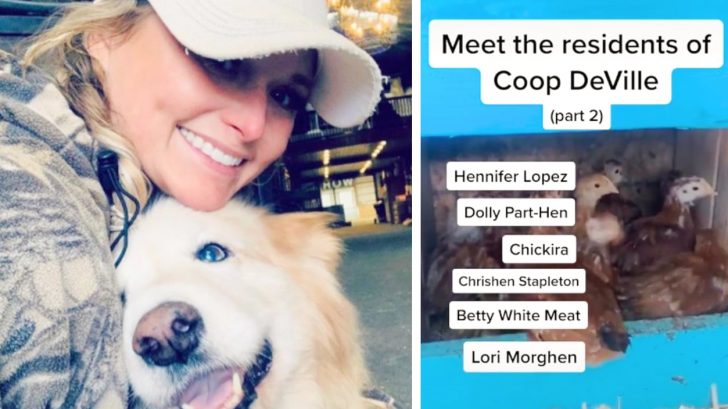 In April, Miranda uploaded a photo slideshow containing a picture of her husband, Brendan, trying to find a spot to sit on the couch. But it was nearly impossible for him to do so because the dogs had claimed the couch for themselves!

See the picture by clicking throughout the slideshow below.

Sunday’s best. What are y’all doin? T-Rex sweats ( my fav but of course the matching shirt has a red wine stain ) Vegetable Soup Garden of Eatin’ Sugar Pie the mini horse Brendan laughing at the number of dogs we have tryna find somewhere to sit Coop De Ville in full swing JD in the way, in the kitchen. Always.

As you may have noticed, the slideshow also contained a video from inside Miranda and Brendan’s chicken coop. The pair added 14 feathered friends to their brood, and Miranda gave them all hilarious chicken-themed names.

Miranda revealed each one of the chicken’s names in two videos on her official TikTok. All of the birds are named after country singers and other celebrities, but with a twist. Their names are given a bit of a chicken flair!

For example, one of the first birds Miranda introduced to her TikTok followers was MarHen Morris, named after her “Way Too Pretty for Prison” collaborator Maren Morris.

Other members of Miranda’s flock include Tanya Clucker, Willie Nelshen, and Dolly Part-Hen. See all of the chicken’s creative and comical names below!

We hope Miranda has other names in mind in case she ever decides to add a few more chickens to her coop! She could even name one after herself, and call it Mirhenda Lambert!

Miranda clearly loves animals, which is why it was perfectly fitting that BuzzFeed interviewed her in 2017 while she played with a group of rescue puppies. Check out that interview below.