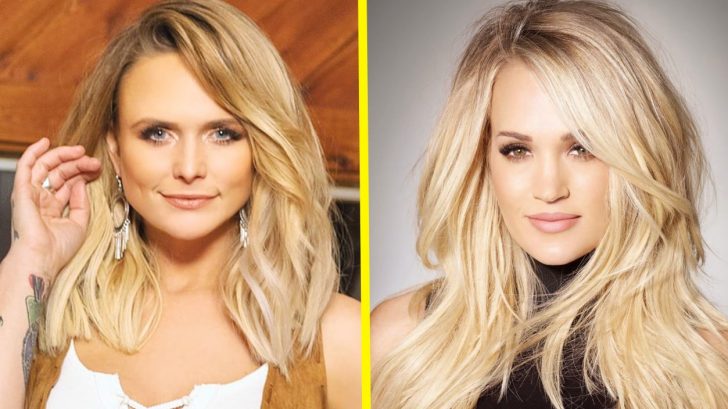 For two years, the nominees for the CMA Entertainer of the Year Award were all male artists. This angered many, and drew criticism from fans and artists alike.

To top it off, the last time a female artist won the Entertainer of the Year Award was back in 2011. That year, the honor was bestowed on Taylor Swift. She also won in 2009.

Prior to that, the last female Entertainer of the Year was actually a group, the Dixie Chicks. They won the award in 2000.

So when the CMA unveiled is 2019 nominees for Entertainer of the Year, people rejoiced when they saw Carrie Underwood‘s name listed.

The #CMAawards ENTERTAINER of the Year nominees are… @GarthBrooks, @EricChurchMusic, @ChrisStapleton, @CarrieUnderwood, @KeithUrban Follow us on Twitter & YouTube to see more nominees revealed by @Midland & @MorganWallen at 10 AM|ET via @Billboard livestream!

There’s no denying the fact that Underwood is a top competitor in the category this year. She just wrapped up her successful Cry Pretty Tour 360, which took her all over the U.S., Canada, and the U.K.

On top of that, she also headlined one night of the CMA Fest. And her singles “Love Wins” and “Southbound” were chart hits.

Those are all things that immediately come to mind when you think of what Underwood accomplished this year. But one of her former duet partners has taken the time to point out some other things that you may not think of, and all make her a quality entertainer.

That former duet partner is of course, Miranda Lambert, who recorded “Somethin’ Bad” with Underwood and released it in 2014.

In a lengthy post she published to Instagram on October 7, Lambert spoke highly of everyone nominated for Entertainer of the Year. But she had the most to say about Underwood.

Calling Underwood “The Entertainer of the Year,” Lambert heaped praise on her longtime friend:

“She blows me away every time I hear her sing. She never wavers in who she is or what she stands for.  She has stayed true & pushed herself to be better.”

Its fall weather in Nashville! Sitting here on my porch, I realize with the chill in the air that it’s getting closer to Nov which means my birthday month and @CMAawards final voting time. Entertainer Of The Year is the big one So I’m gonna share my two cents. ?Keith- a friend and a hero of mine. He took me on tour in 2005. The first big tour I ever got to be part of. He belived in me when I was a baby artist and I will be forever grateful. ?Garth – In Pieces. My first cassette tape I bought with my own money from doing chores. My first concert, Texas stadium 1993. The beginning of a twinkle in my eye. It was life changing. ?Eric -one of the best songwriters of all time in my opinion. He turns a phrase like no other. I’ve had the pleasure of writing with him and he is someone that will push say something in a different way. ?Chris- the kind of voice & songwriting that makes you want to quit, and work harder. A sound that can’t be beat. Period. ?Carrie- The Entertainer Of The Year. Because… Currently being on tour with all female artists, I’ve been thinking a lot about all the work that goes into what we do. The most amazing job in the world. But it ain’t for the faint of heart. @carrieunderwood is on an all female tour too. The Cry Pretty Tour 360. She put out her first single in 2005 and from then on country music was changed for good. That iconic voice has been classin’ up our stages, charts and televisions for a decade and a half. The Voice. The legs. The songs. The brand. The mom. The wife. The okie. The Jesus lover. The blonde bombshell that is Carrie. She blows me away every time I hear her sing. She never wavers in who she is or what she stands for. She has stayed true & pushed herself to be better. If you have never heard her sing “How Great Thou Art” do yourself a favor and listen. I have her back in this picture and I’ll always have her back. So for the sake of sequins, spanx and spray tans, take it home! You Carrie the torch! ?#Carrieon #EOTY

When asked about her comments during an interview with FOX News, Lambert doubled down. She further explained why Underwood is the perfect Entertainer of the Year in her eyes, naming all of the things she has done just in the course of one year:

“But if you think about someone who hosted the CMAs pregnant, then started an all-female tour and then had a baby and then went right back on the road three months later… she has a brand, Calia by Carrie Underwood, and it lifts up women. She does Monday Night Football. I just feel like as a whole entertainer of the year should be someone that entertains in all facets of music.”

We’ll find out during the CMA Awards on November 13 if Lambert’s campaign paid off. Underwood certainly worked hard this year, and is more than deserving of the award and the nomination!