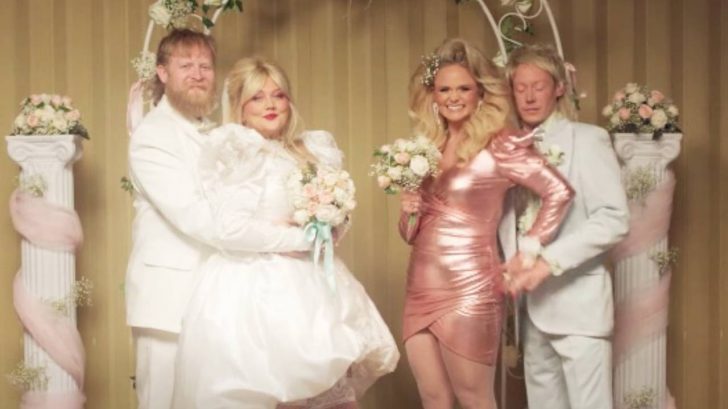 On Friday, February 26, Miranda Lambert and former tour mate Elle King not only released a new song, they also dropped the music video simultaneously! Titled “Drunk (And I Don’t Wanna Go Home),” Lambert first teased the song on February 24 with some footage of the day she and King recorded the single.

While King is not a country singer, she did have country chart success with “Different For Girls,” her duet with Dierks Bentley. She also went on Lambert’s 2019 Roadside Bars & Pink Guitars Tour. Lambert had Maren Morris, Elle King, Ashley McBryde, Tenille Townes Caylee Hammack, and her Pistol Annies bandmates Ashley Monroe and Angaleena Presley join her, making it an all-female tour.

The music video premiered on February 26 and was set in 1986 at a wedding where King was getting married and Lambert was her Maid of Honor. King’s future mother-in-law clearly wasn’t a fan of her wild personality, but by the end of the reception – where Lambert spiked the punch with an entire bottle of alcohol – the groom’s parents lightened up so much that they were dancing with King!

The video went back and forth between footage of the wedding and a performance from the two singers, and was filled with 80s fashion along with lots of hairspray!

Watch the fun-filled music video for “Drunk (And I Don’t Wanna Go Home)” below.