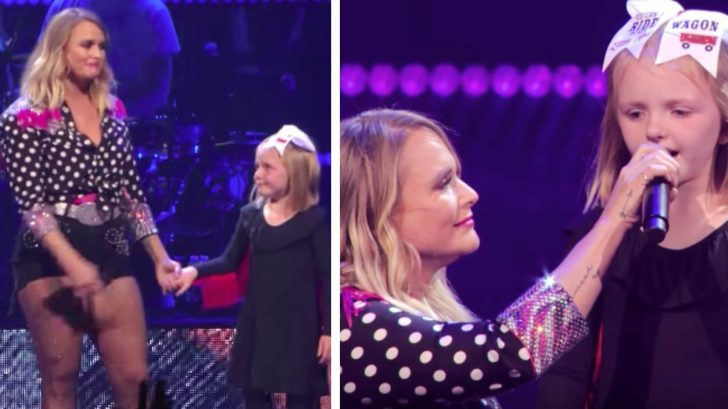 As Miranda Lambert wrote in the description to the YouTube video we’re about to share with y’all, as an artist, “Sometimes there is a face in the crowd that captivates you.” And during her show in Wichita on October 26, 2019, that face in the crowd belonged to a little girl named Remi.

Before going into her 2013 single “All Kinds of Kinds,” Miranda asked her crew if they could bring one of her fans on stage. She pointed to a girl wearing a “Little Red Wagon” bow in her hair, and made it clear she was the girl she was talking about.

“This little girl has stolen my heart all night long and I just want to meet her up close and personal,” Miranda said as the crew brought the young girl on stage.

That’s when she noticed that Remi was crying, which prompted her to ask, “Why are you crying sweetheart, what’s the matter?”

It seems like Remi was just overwhelmed with joy in the moment, which was the reason for her tears. She then agreed to stay with Miranda on stage to help her sing “All Kind of Kinds.”

But Remi’s tears didn’t go away during the song. At one point, Miranda turned around and saw Remi’s sweet face and found herself crying as well. She tried to continue the song, but couldn’t. So she stopped and just let herself feel the emotions of the moment.

Finally, both Miranda and Remi regained their composure and finished out the song together. Miranda even handed over the mic to Remi a few times and she sang the song perfectly.

At the end, Miranda gave Remi a hug and walked her off stage.

The touching moment happened to be captured on camera, and Miranda shared it on her official YouTube channel. “Thank you for the tears and smiles and for being who you are,” Miranda wrote to Remi in the video’s description. “You inspired all of us last night. I’ll never forget you.”

How sweet is that? You can watch the moment that Miranda brought Remi on stage by tuning in to the video below. We’re sure it’s something that Remi will never forget either.