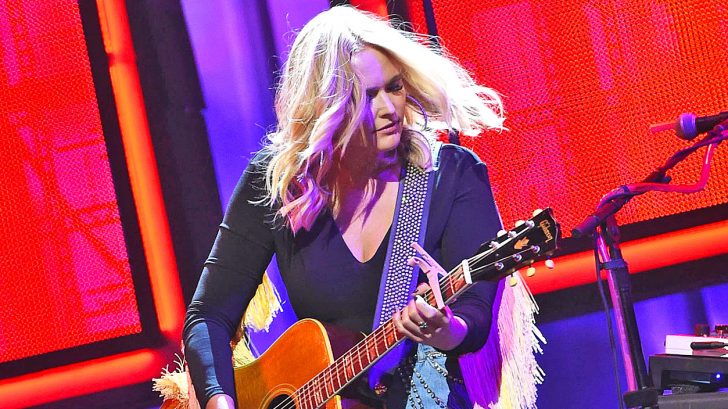 While Miranda Lambert is country through and through, she’s also known to rock a stage every now and then. By that, we mean that Lambert isn’t afraid to embrace her inner rocker chick from time to time.

Those who caught Lambert on tour last year likely got the chance to see her perform a cover of the famous Faces song, “Stay With Me.” On one particular stop, her now ex-boyfriend, R&B and soul artist Anderson East joined her to perform the song as a duet.

Of course, who could forget about Lambert’s feisty performance of ZZ Top’s “Tush” at the 2016 ACM Awards? Her performance was championed as one of the greatest of the night, and it isn’t hard to see why.

Lambert visited another rock and roll favorite on her 2018 tour, the Livin’ Like Hippies Tour. The venture included shows in Greenville, South Carolina, Orlando, Florida, and Atlanta, Georgia.

One fan who attended Lambert’s Atlanta show managed to film her performance of the rock fan-favorite, which was none other than “Rocky Mountain Way” by Joe Walsh. Originally released in 1973, the song reached the 23rd spot on the all-genre Billboard Hot 100 chart. It has since been covered by a number of artists from various genres, and now Lambert can add her name to that list.

Lambert placed her rendition of “Rocky Mountain Way” near the end of her concert set. But she showed no signs of exhaustion, and she sang with just as much energy as ever.

Y’all can probably agree that Lambert’s talents are well-suited for rock songs such as “Rocky Mountain Way.” She knows how to capture the fierce attitude that such songs require, and channels it well through her performances.

You can see what we mean by tuning in to Lambert’s cover of “Rocky Mountain Way” in the clip below. Now that you’ve heard her sing quite a few rock songs, what’s another one you think she should try?