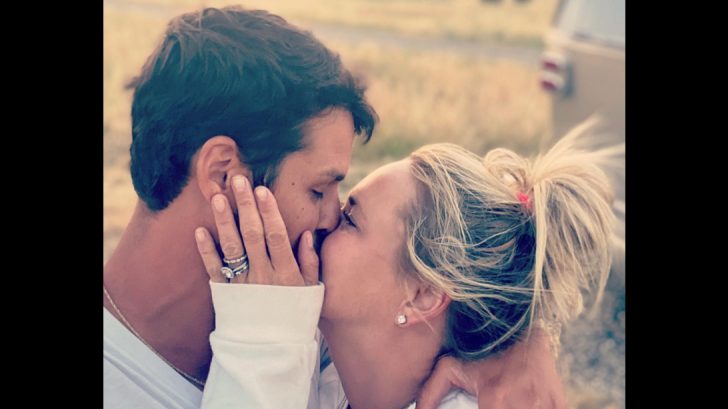 Miranda Lambert and her husband, Brendan McLoughlin, are wrapping up their epic summer road trip with a stop in Big Sky Country.

The “House That Built Me” singer announced in early July that she was taking some time off to “hit the dusty trail” with a 20-day adventure out west. Miranda and Brendan were joined by friends Gwen Sebastian and her husband Louis Newman for a “glamping” trip that kicked off in Colorado.

The couples have documented their trip with photos shared to social media that show stops in Moab and Strawberry Bay, Utah,  as well as the Grand Tetons near Jackson, Wyoming. The trip has been filled with hiking, off-roading and white water rafting.

The final stop on their trip was beautiful Montana. On Tuesday (July 19), Lambert shared a series of photos from the Big Sky State that showed her and McLoughlin sharing a sweet smooch behind their Airstream Globetrotter, aptly named “The Sheriff.”

“Meet me in Montana forever ??” Miranda wrote. “What an amazing trip…Best summer ever.”

McLoughlin shared his own photos of their time in Montana, writing: “The rivers were cold and the views were pristine. Montana was everything I expected and more. Till next time.”

Miranda Lambert is scheduled to return to the stage on July 28th at Lake Tahoe. And will kick off her Las Vegas residency, Miranda Lambert: Velvet Rodeo, in September. The 24-show residency will be at Zappos Theater at Planet Hollywood Resort & Casino, and will feature a setlist that includes songs from Lambert’s seven chart-topping albums as well as her new album release, Palomino.

“When you’ve been touring as long as I have, there’s something really creative about imagining a residency in a city like Las Vegas,” Lambert said of the residency in a statement. “I’ve had a lot of fun designing our sets, merchandise and clothing and boot lines – and even my place on Broadway in Nashville, Casa Rosa – so, this opportunity allows me to lean in a bit more into that side of myself and think about how to really bring country music to life in this room. I think everyone will like what we’ve dreamed up. I’m really excited about this!”