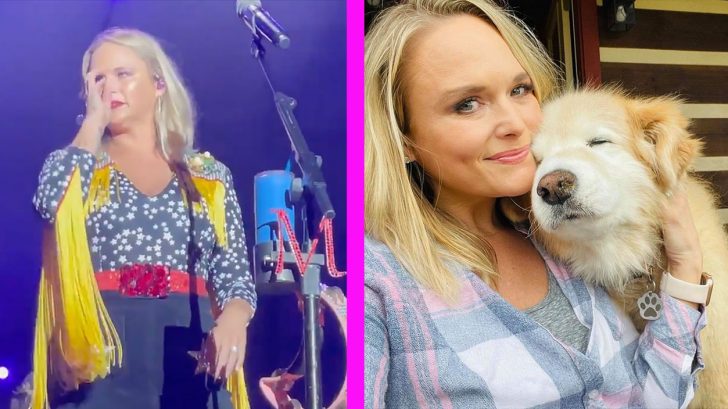 On Saturday, July 31, 2021, Miranda Lambert performed at the Guthrie’s River Ruckus Festival in Guthrie Center. The performance marked her first show since losing her beloved dog, Jessi earlier in the week.

During the show, Lambert was overcome with emotion when she performed “The House That Built Me,” which has a line about her favorite dog being buried in her backyard.

In a video posted to Twitter, you can see Lambert wiping the tears from her eyes as the crowd sang along. Her bandmate Gwen Sebastian came to her side to comfort her before the spotlight was turned off and fans cheered for the emotional moment.

Best fringe forever! That’s @GwenSebastian having my back last night & every night for nearly a decade. A big thank you Iowa for singing so loud all night. Esp on The House That Built Me. After losing Jessi this week, the line about the dog got me pretty teary. Y’all are awesome. pic.twitter.com/sGf94dJGWr

Jessi was one of two dogs Lambert rescued from the side of the road over thirteen years ago. The singer shared a post on Facebook telling the story of how she found them.

“I found her and her brother Waylon on the side of the road in Oklahoma in Jan 2008 in the middle of a sleet storm,” Lambert wrote. “They were 6 weeks old. My mom was in the truck with me and we were listening to the “I am Jessi Colter” album. That’s how they got their names.”

Her first show since losing her dog, Jess this week? so emotional but so amazing to witness this moment… The House That Built Me @mirandalambert @River_Ruckus @GwenSebastian pic.twitter.com/QM5Mmf43ka