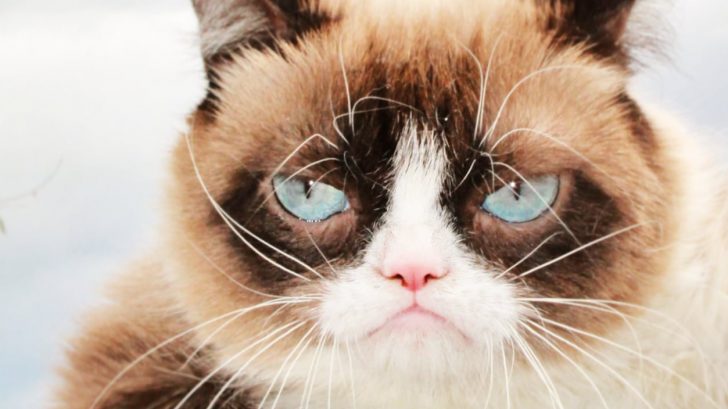 The Internet Loses A Shining Star

Today, the world mourns the loss of one of the most well-known internet sensations…a seven-year-old cat named Tardar Sauce. But you best know her as “Grumpy Cat.”

In 2012, Grumpy Cat went viral when photos of her circulated on the internet due to her angry-looking expression. The pictures spread like wildfire, and her rise to stardom was so fast that her owner, Tabitha Bundese, told Express she was able quit her job a “within days” after the photos went viral.

According to Tabitha, Grumpy’s signature expression was the result of feline dwarfism and an underbite.

While other internet stars see their fame fade away as quickly as it comes, such was not the case for Grumpy Cat. She remained popular for years, amassing over two million followers on Instagram alone.

On top of discovering internet stardom, Grumpy Cat also appeared on TV, inspired her own line of merchandise, had a wax figure designed in her likeness at Madame Tussauds in San Francisco, and appeared in her own Christmas film that debuted in 2014.

“Some Days Are Grumpier Than Others…“

So you can imagine how heartbroken many people were when news broke on Friday morning (May 17) that Grumpy Cat had passed away three days prior, on Tuesday (May 14).

Her owners revealed the news in a heartfelt post shared to Grumpy’s social media accounts, revealing that their beloved cat passed away after suddenly developing a urinary tract infection “that unfortunately became too tough for her to overcome.”

Some days are grumpier than others… pic.twitter.com/ws209VWl97

The statement recognized how even though Grumpy Cat was known for her signature scowl, she helped so many people smile. “Grumpy Cat has helped millions of people smile all around the world – even when times were tough,” it read.

No truer words have ever been said about Grumpy Cat. While she was known for being grumpy, she brought so much joy to the world.

There’s no denying how much Grumpy Cat will be missed. But she will always live on in the hearts of all who came to love her.