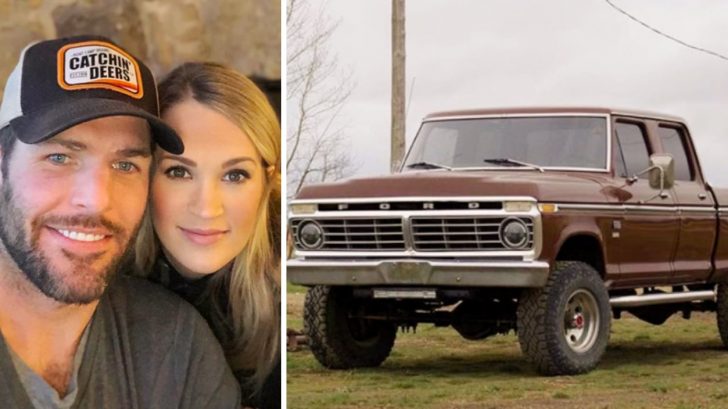 Mike Fisher‘s 1975 Ford F250 truck was stolen on Wednesday night (June 10) in Edmonton, Alberta. The retired NHL star reached out to his followers on social media and asked them to get in touch if they saw his stolen truck out and about.

“If you see this truck anywhere please DM me or contact Edmonton police! It’s a 1975 ford f250 crew cab! Thanks,” he wrote.

Mike, who was born in Canada, now lives in Tennessee with his wife, country singer Carrie Underwood. The couple has two sons, Isaiah (age five) and Jacob (age one).

Since Mike now lives in the U.S., his truck wasn’t stolen from his home. He shared some context in the comments, saying the truck was in a lot waiting to be shipped to him in Tennessee. Because of this, the truck had no plates on it, which made it hard to track down.

But even though the odds of finding the truck seemed small, it was eventually located!

Mike updated his original post about the truck to share that it had been found. He also took a moment to thank everyone who helped in the search.

“Truck was found! Thanks to everyone for all the help!!” he wrote.

See a photo of Mike’s truck below. It’s a beauty!

Truck was found! Thanks to everyone for all the help!!/////my truck was stolen last night in Edmonton Alberta. If you see this truck anywhere please DM me or contact Edmonton police! It’s a 1975 ford f250 crew cab! Thanks #stolentruck #edmonton #f250 #alberta

We’re so glad to hear that Mike found his stolen truck. Hopefully it won’t be too long before he’s able to be reunited with it in Tennessee.

Mike has been in the spotlight quite a bit recently, as he and Carrie have their own four-part miniseries called Mike and Carrie: God & Country. In the series, the couple speaks about their relationship, their children, and how their faith has helped them through some of their lowest points in life.

You can get a little look at the series by tuning in to the clip below.