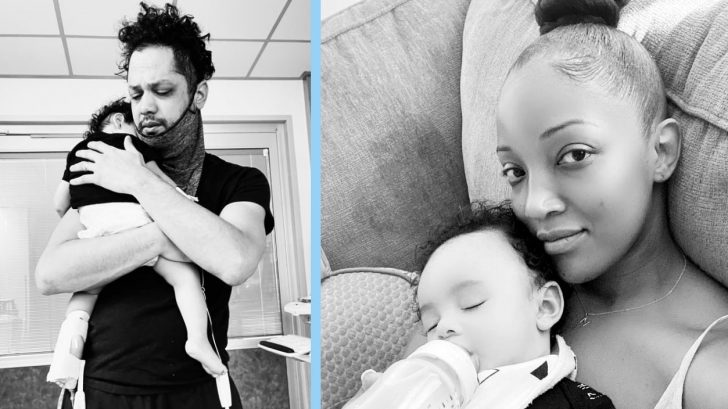 Country singer Mickey Guyton and her husband, Grant Savoy, welcomed their son, Grayson Clark Savoy, in February this year. Mickey said giving birth to her son was “the hardest and most beautiful thing” she had ever done.

Mickey tends to keep her personal life fairly private. But she does share the occasional picture or video of Grayson on social media. Fans have loved watching him grow over the past nine months.

Grayson recently gave his parents a bit of a scare when he fell ill and doctors couldn’t figure out what was wrong. On November 18, Mickey posted that her son was unwell and he was “being sent to the icu.”

Mickey said the doctors didn’t have any idea what was wrong with Grayson at the time. She closed her message by asking her followers to please keep her son in their prayers.

I normally don’t do this but my son is being sent to the icu. The doctors don’t know what’s wrong. Please please pray.

Mickey posted an update on Grayson’s condition the following day (November 19). She shared the update alongside a photo of her husband holding Grayson in the hospital.

“He’s not in the clear but he’s on the mend,” Mickey said of how Grayson was feeling at that time.

The next day (November 20), Mickey shared a lengthier update on Grayson’s health. First, she said the doctors finally discovered why he was ill.

“It turned out to be dehydration because of a severe stomach bug,” Mickey disclosed. She said Grayson first seemed sick on November 11 and had “lost some weight from not being able to retain any liquid.”

Mickey thanked the doctors for taking such good care of Grayson. She said he is now “doing much better” and “all [of his] signs are stable and improving.” All of his lab work also shows “he is headed in the right direction.”

Grayson fortunately didn’t have to spend too much time in the ICU. As Mickey explained:

“He felt every single prayer lifted up over him when he was headed to the icu and it’s working, as he was stabilized and released from the icu within a matter of hours.”

Even though Grayson is doing better now, Mickey asked her fans to “please please please continue to pray for him” as he recovers.

You can read Mickey’s full update on her son’s health below.

Mickey shared another encouraging update on November 21. She said Grayson smiled that day for the first time since he fell ill on November 11.

He hasn’t smiled since November 11th

It’s a relief to hear these updates from Mickey! We’ll certainly be keeping Grayson in our prayers as he continues to recover.