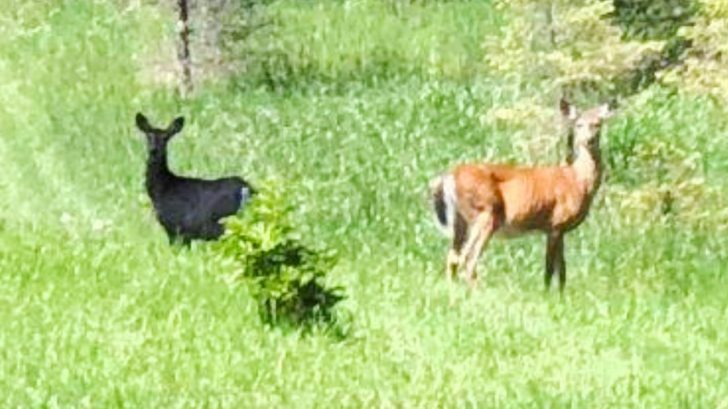 John Roach may want to go out and by himself a lottery ticket.

While driving on his property about 150 miles north of Grand Rapids, Michigan in 2019, Roach stumbled across a surprising sight that few have ever seen before. In a post on Facebook, Roach described how he was driving along when he spotted a couple of deer in the lane at the back of the property.

It isn’t unusual for Roach to see deer, but it is unusual for him to see the type of deer he was seeing that day.

“As I looked to my left I saw two deer in the lane that runs to the back of the property – nothing unusual except that one was typical and one was pitch black,” he wrote.

I see a lot of critters up here but I have never seen nor even heard of one of these. I was taking my trailer back to my…

Luckily, Roach had his phone nearby and was able to snap two pictures before the deer ran away. Although he photographed the deer from a distance, you can clearly see the pure black color of the one deer in the photo above.

Numerous outlets picked up Roach’s story after seeing the picture, including KFVS 12 News. And Roach’s discovery begged the question…just how rare is a black deer?

To give you a short answer, extremely rare. But if you’d like more of an explanation, the North American Whitetail website provides one.

The site debunks the common belief that albino, or white deer, are the rarest type of deer. Instead, it states that black (also known as melanistic) deer are “the rarest of the rare.”

RARE BLACK DEER! You've heard of white deer but what about a black deer? ??

Thanks to John Roach in Michigan for the photo! pic.twitter.com/YgCWwcJADT

“While millions of whitetails have been harvested across the continent in modern times, only a token number of cases of melanism have been documented,” the website reads. “In fact, it’s safe to say that most whitetail hunters have never even heard of melanistic deer, much less seen one.“

Looks like Roach can count himself among the few people to ever lay eyes on a pure black deer!

Another lucky person got the chance to film a black fawn a few years back, and shared the video on YouTube. You can appreciate the creature’s beauty by tuning in to the video below.

Have any of y’all ever seen a black deer before?