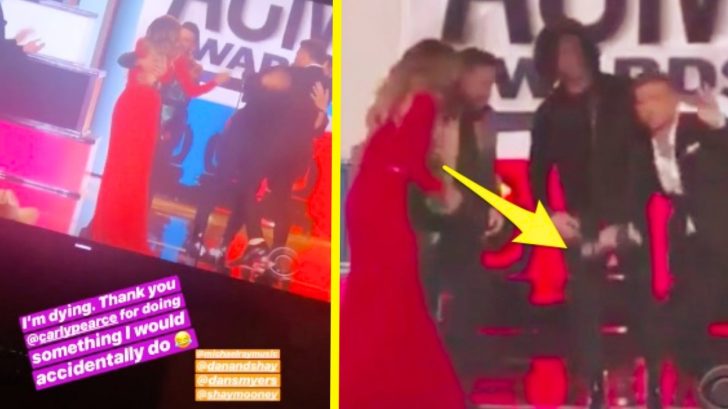 As one of the cutest couples in all of country music, it made perfect sense to have Michael Ray and Carly Pearce present the award for Duo of the Year at the 2019 ACM Awards.

The award went to Dan + Shay, who had already scored wins in two other categories: Single of the Year and Song of the Year, with “Tequila” being the song that led them to those wins.

By winning Duo of the Year, Dan + Shay ended Brothers Osborne‘s three-year winning streak in the category. To say that members Dan Smyers and Shay Mooney were excited would be an understatement.

Pearce and Ray were also thrilled for their friends and their big win. So thrilled that Pearce accidentally dropped the duo’s trophy when she went in to hug Mooney!

The flub happened so fast that you likely didn’t even notice it, even though it occurred in plain view of the camera.

In fact, it was all so quick that Pearce didn’t even seem to notice she had dropped the trophy until Ray swooped in and saved the day. He immediately noticed his fiancée’s mistake, and rushed to recover the trophy from the ground.

Instead of just trying to sweep everything under the rug, Ray comically addressed the moment on Twitter. Sharing a short clip that shows him rescuing Pearce’s dropped trophy, Ray wrote “I always gotcha back babe..” accompanied with the hashtag “#dropitlikeitshot.”

Pearce also called out her mistake on Twitter, using the same hashtag as her fiancé alongside others such as “#yesidroppedit.”

“Excitement overload for my boys @DanAndShay = ultimate ‘TROPHY DROP’ thanks for helping me out, babe @Michaelraymusic,” Pearce wrote.

Even if there hadn’t been a trophy drop, the moment still would have been an unforgettable one for Dan + Shay. You can tune in to the video below to watch them speak backstage after winning the award for Duo of the Year.

Unfortunately, the video doesn’t show Pearce dropping the duo’s trophy, but you can relive that hilarious moment over and over again in the tweets above!