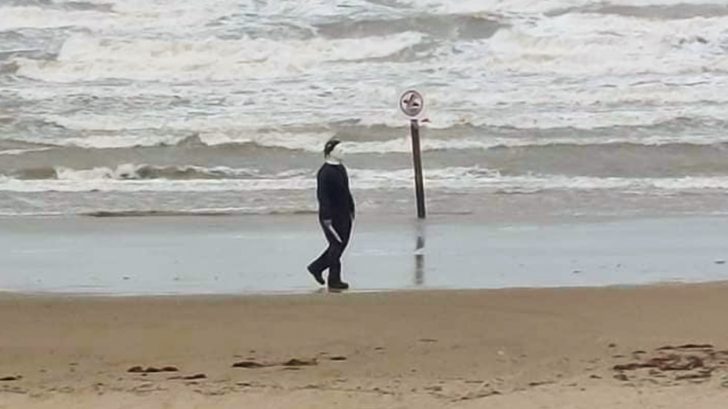 ABC13 reporter Mycah Hatfield was at the beach in Galveston, Texas getting some footage ahead of Hurricane Nicholas when she filmed Michael Myers walking down the beach with a bloody knife in his hand.

Galveston Police Department said they received several phone calls from residents on Monday about the man with the bloody knife and drove out to the scene to assess the situation.

When police confronted the man later found to be, Mark Metzger, a Galveston-area lawyer who is known for dressing up in Holloween costumes, they found out that the knife and blood were fake.

Mark was detained by police and they cited him for disorderly conduct and released him. Local resident, Adam Garrison said the stunt was stupid and the man was probably doing it for attention but had a laugh and called it “another day on the island.”

According to ABC, Mark defended himself by saying that he did it as a way to try and find “a little bit of positivity in the gloomy doom.” But it appears several locals didn’t find it funny. “I just don’t think they appreciate it that much. I guess there’s some people out there that don’t have a sense of humor or, you know, can’t please them all,” he said.

Mark said that he’s dressed in the Halloween suit before and walked down the beach but this was the first time he was stopped by police and detained. Even so, he said he was very cooperative with the authorities and did what they commanded. He laughed saying that he felt like he was in an episode of Scooby-Doo.

“It felt like a scene out of Scooby-Doo after they handcuffed me and pulled the mask off, like, ‘I would have gotten away with it if wasn’t for those meddling Karens, you know?” he said.

Even though some did not like his stunt, Mark said other beachgoers loved it and even stopped to take pictures with him. A beach patrol vehicle even played the famous “Halloween” movie theme song while driving by him.

When asked if he would do it again, he said, “If I had to do it all over again, I absolutely would.”

Just when you THINK you’ve seen it all, someone walks past you down the Galveston beach dressed like Michael Myers in Halloween ahead of Tropical Storm Nicholas 🤦🏼‍♀️ pic.twitter.com/tiztJb4fNc