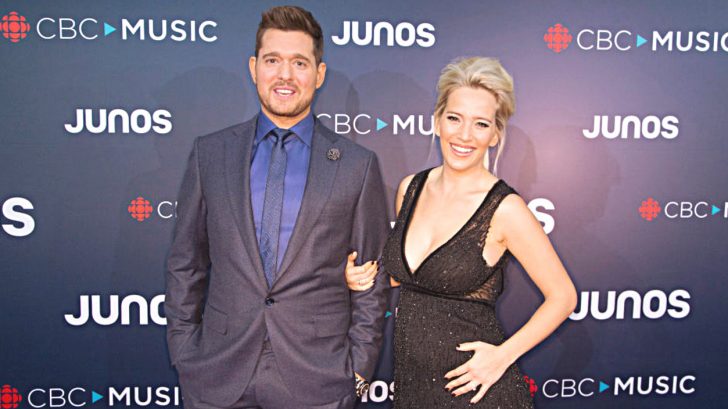 The past few years having been trying ones for Michael Bublé and his family. In 2016, the singer took a step back from his career when he and his wife, Luisana Lopilato, learned that their oldest son, Noah, had liver cancer.

Michael took time off to help care for Noah who was only three at the time. He underwent four months of chemotherapy in Los Angeles, and was doing well after that.

Speaking during a press conference in April 2017, Luisana said they were hopeful for the future. “But we are very happy,” she said. “We are looking forward to thinking about the future, to seeing our children grow.”

After enjoying the past year with now four-year-old Noah and their two-year-old son Elias, the couple has found even more happiness than ever before. And that’s because they’re expecting baby number three!

Michael revealed the big news on Sunday night (March 25) during his opening monologue as the host of the Juno Awards. Established to honor Canadian musicians, the Juno Awards are comparable in prestige to the Grammy Awards in the U.S.

After Michael got the ball rolling for the show, he interrupted everything to share his joyous news. He started off by recalling how when he hosted the show five years prior, Luisana was pregnant with Noah:

“You have filled me up with joy and love and luck,” he said. “Five years ago, when I hosted the first time in Regina, you brought me luck and I was pregnant…I mean, my wife was…I mean, we were pregnant with our first child.”

Then, he moved into his pregnancy announcement, causing the audience to erupt with cheers.

“Oops! You did it again. My wife and I are pregnant with our number three,” he said, before looking at Luisana and telling her he loved her.

You can watch Michael reveal his baby news in the video below. Congratulations to him, Luisana, Noah, and Elias!