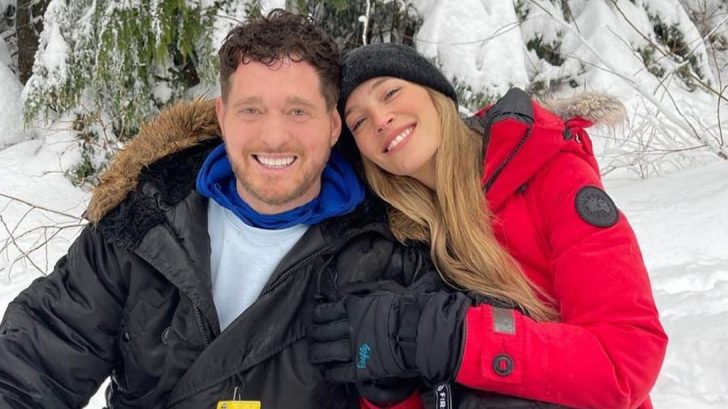 Congratulations are in order for Michael Buble and his wife Luisana Lopilato who are expecting their fourth child! Buble revealed the news in his music video for “I’ll Never Not Love You,” released Tuesday (February 22).

The music video stars Buble and his wife in a sequel to his 2009 video for “I Just Haven’t Met You Yet” that was filmed before the pair married in 2011.

In the new video, Buble and Lopilato recreated some of the most romantic scenes in Hollywood movie history, including scenes from The Notebook, Love Actually, Casablanca and Titanic. In the video’s closing scene, Buble’s wife wakes him from a day dream in a grocery store, much like the setting for the “I Just Haven’t Met You Yet” video. As Michael, his wife and their three kids (Noah,8, Elias, 5, and Vida, 3) leave the store, Lopilato proudly displays her baby bump.

Buble confirmed the news of their upcoming addition during an appearance on On Air with Ryan Seacrest Tuesday morning.

“We’re so excited to get to tell people. What’s weird is getting all these messages yesterday and I haven’t answered one cousin,” he said. “So this will be the first time that I actually say these words, but yes, my wife and I are grateful to be expecting.”

The singer added that he would love to have more than four children.

“My wife is probably happy, but I would love to have as many as she would let me have,” he said.

The couple shared a set of identical photos on social media also announcing the news. “Oops! We did it again,” the caption read.

See Michael Buble alongside his wife in the music video for “I’ll Never Not Love You” below. And watch to the end for their adorable pregnancy announcement.